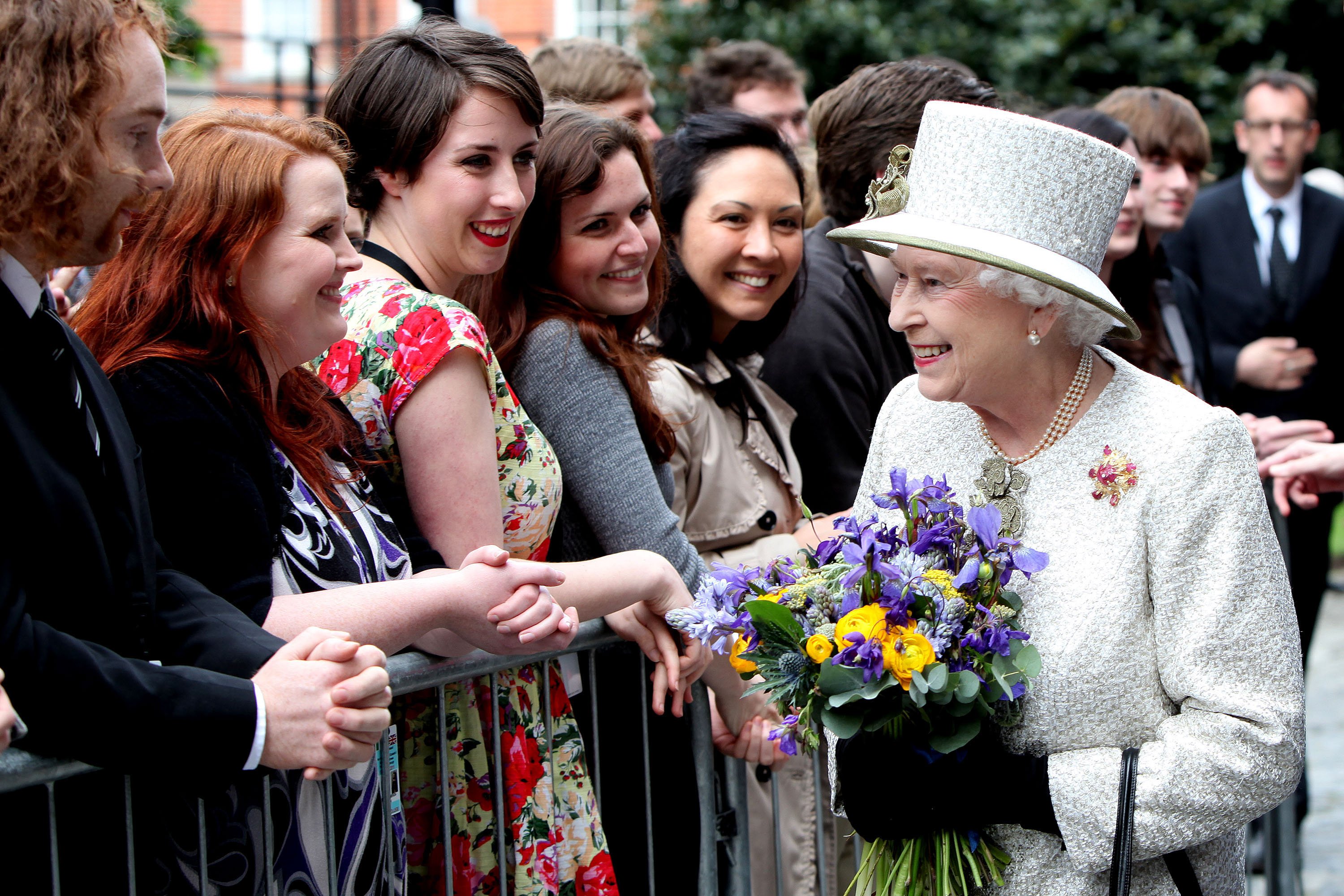 DUBLIN - Undeterred by real or fake bombs, Queen Elizabeth II on Tuesday began the first visit by a British monarch to the Republic of Ireland, a four-day trip to highlight strong Anglo-Irish relations and the success of Northern Ireland peacemaking.

Resplendent in a cloak of emerald green and a dress of St. Patrick's blue, the 85-year-old queen stepped out from a bombproof, bulletproof Range Rover outside the official residence of Irish President Mary McAleese. Irish Army artillery units fired a 21-gun salute as a military brass band played "God Save the Queen."

The painstakingly choreographed visit has been designed to highlight today's exceptionally strong Anglo-Irish relations and the slow blooming of peace in neighboring Northern Ireland following a three-decade conflict that left 3,700 dead.

Pictures: The Queen in Ireland

The queen arrived 100 years after her grandfather George V visited an Ireland that was still part of the British Empire.

Beaming smiles by the queen and McAleese — a Belfast-born Catholic who has spent 14 years lobbying for Elizabeth II to visit — demonstrated genuine warmth between the two women, who have met several times before.

McAleese said Britain and Ireland were "determined to make the future a much, much better place." The queen didn't comment ahead of her planned speech Wednesday night at Dublin Castle, the former seat of British rule of Ireland.

A 33-motorcycle police escort led the queen to McAleese's residence in Dublin's vast Phoenix Park through the unusually empty streets of Dublin — cleared to ensure no anti-British extremist could get close enough to launch an attack. Nearby Dublin Zoo was closed as a security precaution and no civilian aircraft were permitted over the city center for the day.

Reflecting her determination to build a new relationship with Ireland, the queen placed a wreath at the Garden of Remembrance in central Dublin, which honors Irish rebels who lost their lives fighting to free Ireland from British control.

There were no apologies, no acknowledgment of past wrongdoings — no words at all, in fact, in a ceremony highlighted by a minute's silence — but the presence of a British queen on what is hallowed ground for many Irish republicans was a powerful message itself.

The queen also showed her stamina, walking a lengthy stretch beside a reflecting pool before climbing 28 stone steps without faltering to reach a sculpture honoring the dead.

Helicopters and fixed-wing aircraft patrolled the skies to make sure there were no attacks, and snipers with binoculars could be seen on nearby rooftops.

Activists from the Irish nationalist Sinn Fein party, whose national headquarters is near the garden, released black balloons into the sky as the queen arrived.

Sinn Fein lawmaker Aengus O Snodaigh said they were intended to symbolize the hundreds killed by British troops in Northern Ireland and the 33 people killed in car bomb attacks on Dublin and the border town of Monaghan exactly 37 years ago. It was the deadliest terrorist attack in Republic of Ireland history.

"We are living in changed and changing times," O Snodaigh said. "But the fact that Dublin city is on lockdown for the week makes it clear that the relationship between the two islands is still not `normal.' Sinn Fein wants to have good relations with all our neighbors, but that can only happen in an atmosphere of equality and mutual respect and with the reunification of our country."

Several thousand Dubliners lined the streets hoping to see the queen. Some cheered and clapped as she left Trinity College after meeting Ireland's academic elite and viewing the nation's most treasured book: hand-illustrated medieval Gospels called the Book of Kells.

Irish Republican Army dissidents opposed to reconciliation — and angered in particular by her visit to the memorial garden — tried to undermine the trip with real and hoax bombs, but they caused no significant disruption.

Irish Army experts overnight defused one pipe bomb on a Dublin-bound bus that was detected in Maynooth, 15 miles west of the capital. The device was deemed "viable," reports CBS News correspondent Mark Phillips, but police said the bomb was not primed to detonate.

A second device abandoned near a light-rail station in west Dublin was deemed a hoax Tuesday morning. Police responded to at least two more reports of suspicious packages in north Dublin, but no further bombs were confirmed.

As the queen traveled to the rebels' memorial, police scuffled with small groups of anti-British protesters on the edge of the security perimeter. Many waved placards that read "Britain out of Ireland," referring to the fact that Northern Ireland remains part of the United Kingdom.

At one flashpoint, officers used pepper spray to prevent a few men from breaching security barriers, then police on horseback drove back the crowd. At the other trouble spot, protesters tried to block Dublin's major thoroughfare, O'Connell Street, but were pushed to the sidewalk by police. No serious injuries were reported.

Several small IRA splinter groups concentrated along the Irish border continue to plot gun and bomb attacks in Northern Ireland in hopes of undermining the success of its 1998 peace accord, particularly its stable Catholic-Protestant government.

But Irish and British officials were keen to stress that the queen's visit to Dublin, Kildare, Tipperary and Cork would proceed as planned — accompanied by the biggest security operation in the Republic of Ireland's history.

"This is the start of an entirely new beginning for Ireland and Britain," Irish Prime Minister Enda Kenny said.

More than 8,000 police, two-thirds of the entire country's police force, shut down key roads in central Dublin and erected pedestrian barricades for several miles (kilometers). Police made it extremely difficult for protesters to get within sight of any of the queen's engagements.

Britain and Ireland spent decades in frosty opposition following Ireland's 1919-21 war of independence and the creation in 1922 of the Irish Free State. Northern Ireland, created in 1921, remained in the United Kingdom.

Ireland stayed neutral in World War II and offered condolences to Germany over Adolf Hitler's death. It broke all symbolic ties with Britain by declaring itself a republic in 1949 and offered sympathy and a relatively safe haven when the modern IRA in 1970 began shooting and bombing in Northern Ireland.

But after Britain and Ireland joined the European Union in 1973, and as the bloodshed in Northern Ireland spilled over into the Catholic south, the governments in London and Dublin gradually found common cause.

Their cooperation provided the essential bedrock for Belfast's Good Friday peace accord in 1998. IRA disarmament and a coalition government of Northern Ireland's British Protestant majority and its Irish Catholic minority eventually followed.