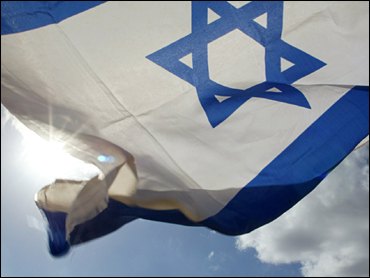 "There is hope, yes," senior European Union diplomat Javier Solana said as he headed for U.N. Secretary-General Kofi Annan's sunlit 38th floor office. "I hope it will be a good meeting," he said.

Only the United States was enthusiastic in the first place about Sharon's idea, which would have withdrawn Israeli troops and all 7,500 settlers from the Gaza Strip and undertaken a partial pullback from the West Bank.

The other partners of the self-styled Quartet — the United Nations, the European Union and Russia — while aware that their joint road map to peace talks was languishing, preferred a much larger withdrawal and other changes.

"With the stalled Middle East peace plan on life support, the U.N. Quartet is meeting to try to find a face-saving alternative," said CBS News Foreign Affairs Analyst Pamela Falk, "with calls to return to the 'roadmap' a likely result."

The Bush administration held its ground Monday. The White House reaffirmed its support for what spokesman Scott McClellan called Sharon's bold proposal and said staff-level talks had begun with Israel to determine how to move forward.

Later, a senior Bush administration official speaking on condition of anonymity said Mr. Bush would not try to put Sharon's Gaza plan back on track.

On Sunday, Sharon's Likud party voted against his plan 60 percent to 40 percent in a nonbinding referendum. That sent the prime minister back to the drawing board to develop a scaled-down version that might get by Likud but would be even more unlikely to attract the support of the Palestinians or their Arab and European supporters.

And in Washington, a group of about 50 former U.S. diplomats signed a letter to President Bush contending that his "unabashed support" for Sharon is costing the United States "credibility, prestige and friends."

"By closing the door to negotiations with Palestinians and the possibility of a Palestinian state, you have proved that the U.S. is not an evenhanded peace partner," the letter said.

With no winning alternative immediately in sight, Annan hosted the meeting in a conference room outside his office. It was bound to produce a restatement of determination to end the conflict between Israel and the Palestinians in a way that sets up a Palestinian state on land the Arabs lost in the 1967 Six-Day War.

At the State Department, spokesman Richard Boucher said Monday the administration believes Sharon's disengagement plan could represent a way to move the road map forward. "It will be up to Mr. Sharon to decide how to proceed," Boucher said.

Looking beyond the Likud party vote to the goal of the road map itself, Boucher said the Israelis widely support "the idea of moving forward and the idea of withdrawing from Gaza."

Implying that despite its support for Sharon's initiative, the Bush administration was leaving its diplomatic options open, Boucher said: "I don't think we have hitched our wagon to any single effort."

Sharon won President Bush's support for the plan at a White House meeting last month. Bush backed the Israeli leader on two key issues. He said new realities since 1967 — the 225,000 Israeli Jews who have established communities on the West Bank — suggest some Jewish settlements ought to remain on there as part of an overall agreement with the Palestinians.

Mr. Bush also rejected Arab demands for a "right of return" that would resettle in Israel some Palestinians who claim their families were expelled during the establishment of Israel in 1948.

By contrast, the United Nations, European governments and Russia support the Arabs in insisting that Israel relinquish all of Gaza, all of the West Bank and part of Jerusalem to the Palestinians.

Fred Eckhard, the U.N. spokesman, referring to Sharon's proposal, said Monday that Annan believed "any withdrawal should clearly lead to an end of (Israel's) occupation and be carried out as part of the Quartet's road map in cooperation with the Palestinian Authority."

Last week, Annan said the road map was "in distress but not dead."

Apart from the Quartet meeting, Powell planned a groundbreaking session with Mehmet Ali Talat, prime minister of the breakaway ethnic Turkish state in northern Cyprus. Powell is believed to be the most senior U.S. official to meet with a Turkish Cypriot leader since Secretary of State James A. Baker III met in 1990 with Rauf Denktash, the rump state's president.

The United States, like all countries except Turkey, refuses to recognize the ministate Turkish Cypriots set up on the 37 percent of Cyprus that they have controlled since Turkish troops landed on the island nation 30 years ago to prevent Cyprus' union with Greece.

The Turkish Cypriots, unlike the majority Greek Cypriots, voted last month to approve a U.N. plan to reunify the island.