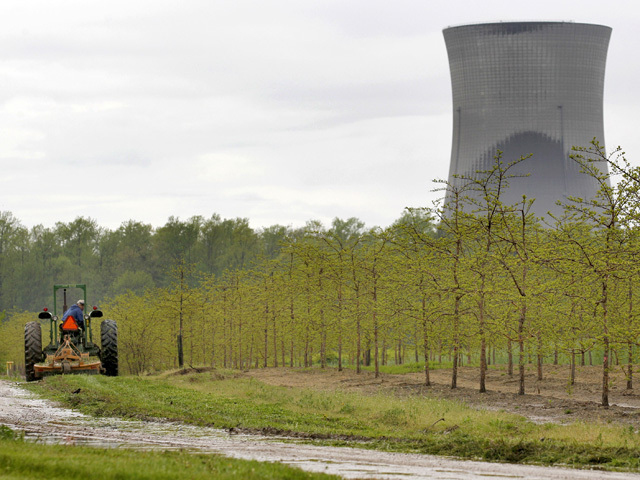 WASHINGTON - The risk that an earthquake would cause a severe accident at a U.S. nuclear plant is greater than previously thought, 24 times as high in one case, according to an AP analysis of preliminary government data. The nation's nuclear regulator believes a quarter of America's reactors may need modifications to make them safer.

The threat came into sharp focus last week, when shaking from the largest earthquake to hit Virginia in 117 years appeared to exceed what the North Anna nuclear power plant northwest of Richmond was built to sustain.

The two North Anna reactors are among 27 in the eastern and central U.S. that a preliminary Nuclear Regulatory Commission review has said may need upgrades. That's because those plants are more likely to get hit with an earthquake larger than the one their design was based on. Just how many nuclear power plants are more vulnerable won't be determined until all operators recalculate their own seismic risk based on new assessments by geologists, something the agency plans to request later this year. The NRC on Thursday issued a draft of that request for public comment.

The review, launched well before the East Coast quake and the Japan nuclear disaster in March, marks the first complete update to seismic risk in years for the nation's 104 existing reactors, despite research showing greater hazards.

The NRC and the industry say reactors are safe as they are, for now. But emails obtained in a more than 11,000-page records request by The Associated Press show that NRC experts were worried privately this year that plants needed stronger safeguards to account for the higher risk assessments.

The nuclear industry says last week's quake proved reactors are robust. When the rumbling knocked out off-site power to the North Anna plant in Mineral, Va., the reactors shut down and cooled successfully, and the plant's four locomotive-sized diesel generators turned on. The quake also shifted about two dozen spent fuel containers, but Dominion Virginia Power said Thursday that all were intact.

Still, based on the AP analysis of NRC data, the plant is 38 percent more likely to suffer core damage from a rare, massive earthquake than it appeared in an analysis 20 years ago.

That increased risk is based on an even bigger earthquake than the one last week. Richard Zuercher, a spokesman for Dominion, the plant operator, says the earlier estimate "remains sound because additional safety margin was built into the design when the station was built."

The safety cushion would shrink, though, if the plant's risk is found to be greater.

Federal scientists update seismic assessments every five to six years to revise building codes for some structures. But no similar system is in place for all but two of the nation's 104 reactors — even though improving earthquake science has revealed greater risks than previously realized.

The exception is Diablo Canyon in earthquake-prone California, which has been required to review the risk of an earthquake routinely since 1985. The NRC does not require plants to re-examine their seismic risks to renew operating licenses for 20 years.

After the March earthquake in Japan that caused the biggest nuclear crisis since Chernobyl, NRC staffers fretted in emails that the agency's understanding of earthquake risk for existing reactors was out of date.

In a March 15 email, for example, an NRC earthquake expert questioned releasing data to the public showing how strong an earthquake each plant was designed to withstand. The seismologist, Annie Kammerer, acknowledged that recent science showed stronger quakes could happen. "Frankly, it is not a good story for us," she wrote to agency colleagues.

Kammerer's boss, Brian Sheron, who heads the NRC's Office of Nuclear Regulatory Research, wrote in a March 14 email that updated numbers showed the government "didn't know everything about the seismicity" in the central and the eastern part of the country.

"And isn't there a prediction that the West Coast is likely to get hit with some huge earthquake in the next 30 years or so? Yet we relicense their plants," he wrote.

The NRC flagged the 27 plants for possible upgrades by calculating the likelihood of a severe accident based on 2008 hazard maps from the U.S. Geological Survey and comparing it to the seismic risk estimated in 1989 or 1994. Those data were used the last time existing reactors evaluated their earthquake hazards.

The NRC identified the 27 reactors with the greatest risk increase but did not provide the risk numbers. The AP used the NRC's data and methodology to calculate the risk increase for each reactor.

The Perry 1 reactor in Ohio tops the list with the steepest rise in the chance of core damage: 24 times as high as thought in 1989. The four other plants with the largest increases include River Bend 1 in Louisiana, up nine times; Dresden 2-3 in Illinois, eight times; Farley 1-2 in Alabama, seven times, and Wolf Creek 1 in Kansas, also seven times. The smallest increase was the 38 percent at North Anna.

Todd Schneider, a spokesman for First Energy Corp., which operates the Perry plant, said the increase in its seismic risk estimated by the NRC is misleading. He said Perry is capable of withstanding an even larger earthquake than is typical for the region.

Personnel at a handful of other plants, including Indian Point outside New York City and Oconee in South Carolina, have already redone the NRC's calculations, and they show a much lower risk of core damage from earthquakes. Those calculations have not yet been reviewed by the agency, which along with other federal agencies is developing a baseline earthquake risk for every nuclear power plant to use.

The average risk to U.S. reactors of core damage from a quake remains low, at one accident every 500 years, according to the AP analysis of NRC data. But predicting earthquake probability and damage is dicey; the Japanese nuclear industry was taken by surprise in March when a quake-driven tsunami far surpassed predictions and swamped the Fukushima Dai-ichi site.

The U.S. nuclear industry may not be fully ready, either. Current regulations don't require the NRC to make sure nuclear reactors are still capable of dealing with a new understanding of the threats.

It's not just earthquakes. It is all types of events, including floods, tornadoes and hurricanes, said an NRC official, who spoke on condition of anonymity because he was not authorized to speak about the agency's recent seismic work.

The worry about earthquakes is not so much direct damage to the reactor vessel, the hardened enclosure where the nuclear reaction takes place, but to water tanks and mechanical and electrical equipment needed when disaster strikes. The failure of those systems could disable cooling needed to prevent meltdowns of radioactive fuel.

In some of the emails obtained by the AP, NRC staffers worried that U.S. reactors had not thoroughly evaluated the effects of aftershocks and the combined impact of a tsunami and earthquake. They suggested plants might need more durable piping as well as better flood barriers and waterproof storage of essential equipment. Staffers talked of a need for bigger supplies of fuel and batteries for extended losses of all electrical power. One email expressed concern about some key pumps at Dresden that might fail in an earthquake.

In a separate problem reported last month, GE Hitachi Nuclear Energy acknowledged that its older control rods could get stuck if an earthquake struck when reactors were running at low power. Control rods are needed to stop the nuclear reaction. The manufacturer has alerted the operators of 35 U.S. reactors at 24 sites, who are checking whether replacements are needed. The AP documented scores of instances of such wear and tear in a range of equipment in a June investigative series showing that safety standards have been relaxed to keep aging reactors within the rules.

When the NRC ran preliminary calculations of quake risk last year, it was the first time the agency had reassessed the threat since most plants were built.

"The plants were more vulnerable than they realized, but they weren't unsafe. We look at rare, rare events," said Kammerer, the NRC seismologist.

Plants built a generation ago were designed to withstand an earthquake larger than any known to have occurred in the area. But since then, scientists have been able to better estimate the earthquakes that are possible. And in some cases, those rare quakes could be larger and more frequent than those the plants were designed for.

"If they met a certain level, they didn't look any further," Gregory Hardy, an industry consultant at Simpson, Gumpertz and Hegger in Newport Beach, Calif., said of some of the industry's earlier assessments. "Forty years ago, when some of these plants were started, the hazard — we had no idea. No one did."

Seismologists inside the agency didn't recognize that increasing earthquake risk was an issue until operators started applying to build new reactors at existing plant sites in the central and eastern United States in 2003. Those applications included a thorough analysis of the risk posed by earthquakes, which is required for all new nuclear power plants.

In some cases, the result was much higher than risk calculations performed by the industry in the early 1990s as part of a broader assessment of worst-case disasters.

"We did have some idea that the hazard was going up" in the period between the late 1990s analysis and the applications for new reactors, said Clifford Munson, a senior technical adviser in the NRC's Office of Nuclear Reactors. But Munson said some of the research indicated that there was disagreement on whether the ground motion predicted would damage nuclear power plants.

Kamal Manoly, another NRC senior technical adviser, said, "There was nothing alarming (enough) for us to take quick action."

But a task force requested by President Barack Obama to make U.S. safety recommendations after the Japanese accident has questioned that. Its three-month review concluded that existing reactors should re-examine their earthquake risk more often.

Some operators are expressing caution about the NRC's initial analysis, and say their own early calculations show that their facilities are at much lower risk. The differences between the calculations of government and industry have prompted some to call for a third-party review.

"It sort of defies logic to ask the regulated entity to do the seismic analysis to determine whether upgrades are necessary or relicensing is appropriate," said California Sen. Sam Blakeslee, a geophysicist who pushed a bill through the Legislature giving the California Energy Commission a role in assessing seismic risk, particularly at Diablo Canyon. "There needs to be a more arm's length relationship in getting this technical information."

There will always be uncertainties, experts say.

"If all these plants were subjected to large earthquakes, that's the only way anybody can say for sure. But the only ones we know of are in Japan," said Hardy, referring to the quake that struck in March and another in 2007 that damaged the Kashiwazaki-Kariwa nuclear power plant.

"There is a pretty good technical feeling that U.S. plants are going to be safe," Hardy said, "but there is just a question of how much work it will take to show it."