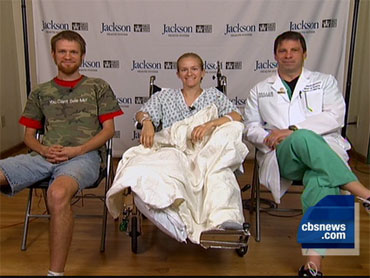 Stories of resilience and selflessness among survivors are emerging from the ruins of the earthquake that devastated Haiti Tuesday. Grateful to be alive, their thoughts have turned to others.

Christa Brelsford, of Anchorage, Alaska, was volunteering in Dabonne, south of Port-au-Prince, Haiti, on an 11-day program to teach adult and child literacy when the quake hit. It took her brother Julian and their friends nearly an hour and a half to dig her from debris, her legs trapped by rubble when a building collapsed.

In an e-mail to friends and family, Christa wrote: "I was trapped under a collapsing building. I am not in danger of dying, but my right leg was crushed below the knee and it may not survive. Otherwise I am fine."

Her right leg was amputated from the shin down.

Julian got out of the building before it came down.

Christa says her thoughts are with the Haitian people.

From her bed in the University of Miami-Jackson Memorial Hospital Friday, Christa told "The Early Show" co-anchor Maggie Rodriguez she's "so happy I'm alive that I don't care about my foot at all."

Her prognosis, says Dr. Mark McKenney, a trauma surgeon and medical director of the Ryder Trauma Center at UM-Jackson, is "great. She's young she's healthy." After another operation, he says, Christa should be able to walk again, with a prosthesis.

Do Christa and Julian want to return to Haiti?

In an interview with CBS affiliate KTVA, Christa's mother Terry and father Taylor said a picture taken from the siblings' previous trip to Haiti last summer has a new meaning to the Berelsfords now: it shows two men who dug Christa out of the rubble after the earthquake. "We will owe them gratitude forever and ever," her father said.