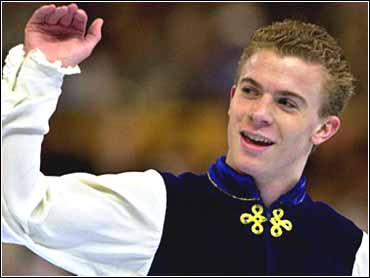 The Quad King is the U.S. champion. Almost by default.

With former champion Todd Eldredge cutting down his jumps and Michael Weiss barely able to stand up, Timothy Goebel stuck with what works for him. He landed a quadruple jump, two triple axels and four other triples Saturday to win his first men's title in the U.S. Figure Skating Championships.

"I'm pleased to prove I deserve to be a world team member," Goebel said.

Eldredge, the five-time champion who returned to nationals after a two-year absence, was a very shaky second. Weiss, in what might have been the biggest collapse by a defending champion, was fifth in the free skate, dropping him all the way to fourth overall.

Matt Savoie was uninspiring, but he managed to stay on his feet and that was good enough for third place.

The talk all week was how tough the men's competition would be, with Weiss, Eldredge and Goebel all vying for the United States' two spots in the world championships. As if that wasn't pressure enough, results at worlds will determine how many men the United States can send to the Salt Lake Olympics.

But it wasn't really a contest at all.

"I still had to go out and do my job," Goebel said. "As we saw earlier in the event, two very consistent skaters made a lot of errors. That could be good because it gives you an opening, but you can also start to second-guess yourself. You have to go out to do your job."

Eldredge didn't have quite the meltdown he did in the Nagano Games, but it sure wasn't one of his usual spectacular performances. Skating first in the last warmup group, he was tentative from the start.

He cut his quad down to a triple, one of only five he did. Some of the junior men manage more than that. And he never even tried a triple loop, triple salchow or triple flip.

By the end of his program, he was doing double loops and double salchows, jumps he mastered when he was about 10.

"Obviously, it didn't go as well as I hoped, but that's the way it goes sometimes," Eldredge said. "It was disappointing because the practices were going well."

His spins were, as always, masterful, but Eldredge knew it wasn't his best. As the music stopped, he shook his head slightly before turning to acknowledge the crowd.

"Since the quad was missed, he was probably readjusting his mind to fitting it in again," said his coach, Richard Callaghan. "There was just too much going on in his mind."

Eldredge still got marks of 5.7 and 5.8 for presentation, but the opening was there for Goebel and Weiss.

Instead of taking it, Weiss opened the door even wider. He fell on his quad, two-footed a triple axel and then fell on his next axel attempt.

He didn't land any jump until 3:17 into the program. Goebel, on the other hand, did three in the first 60 seconds.

"It's been such a long year, and as soon as I missed the quad, it toothe gas out of me," said Weiss, who's missed most of the season with a stress fracture in his foot. "I was hitting it so well and it took me off-guard. Once you're knocked off-balance, it's hard to get it back."

And he never did. Normally so aggressive, he was uncharacteristically slow and shaky. Usually confident almost to the point of being cocky, he looked as if he didn't trust himself.

The judges didn't have any confidence in him, either. One gave him a 4.9 when's the last time the defending champion saw that? for technical merit, and another gave him a 5.1.

His artistic marks went up, mostly 5.6s, but it wasn't enough to save him.

"I feel like I'm the best skater in the country and it was not there for me today," he said.

So that left Goebel. Unlike Weiss and Eldredge, Goebel's strength is his jumping. He was the first American to land the quad, and the first in the entire world to do three in one program.

He's been slammed for his lack of artistry, and switched to Frank Carroll last summer knowing he had to improve it. But with Eldredge and Weiss reeling, Goebel went back to what's always worked for him: his springs.

He knocked off his quad salchow-triple toe jump combination like it was a warm-up move. His triple axel was huge, and a smile crossed his face.

He popped his quad toe and fell on another salchow, but when he nailed his triple flip and triple salchow in the final moments, the title was his.

"I thought it was gutsy," said Carroll, who also coaches Michelle Kwan, the women's champion. "He went for all the quads. I'd like it he'd landed the second quad salchow, and I think that's the only thing he could have done better."

That and show some emotion. Unlike Eldredge and Weiss, who figure skate, Goebel often doesn't do much more than basic stroking or gliding. Despite all his hours with Carroll, his posture is still bad and his expression wooden.

But when no one else can stand up, being able to fly is good enough.