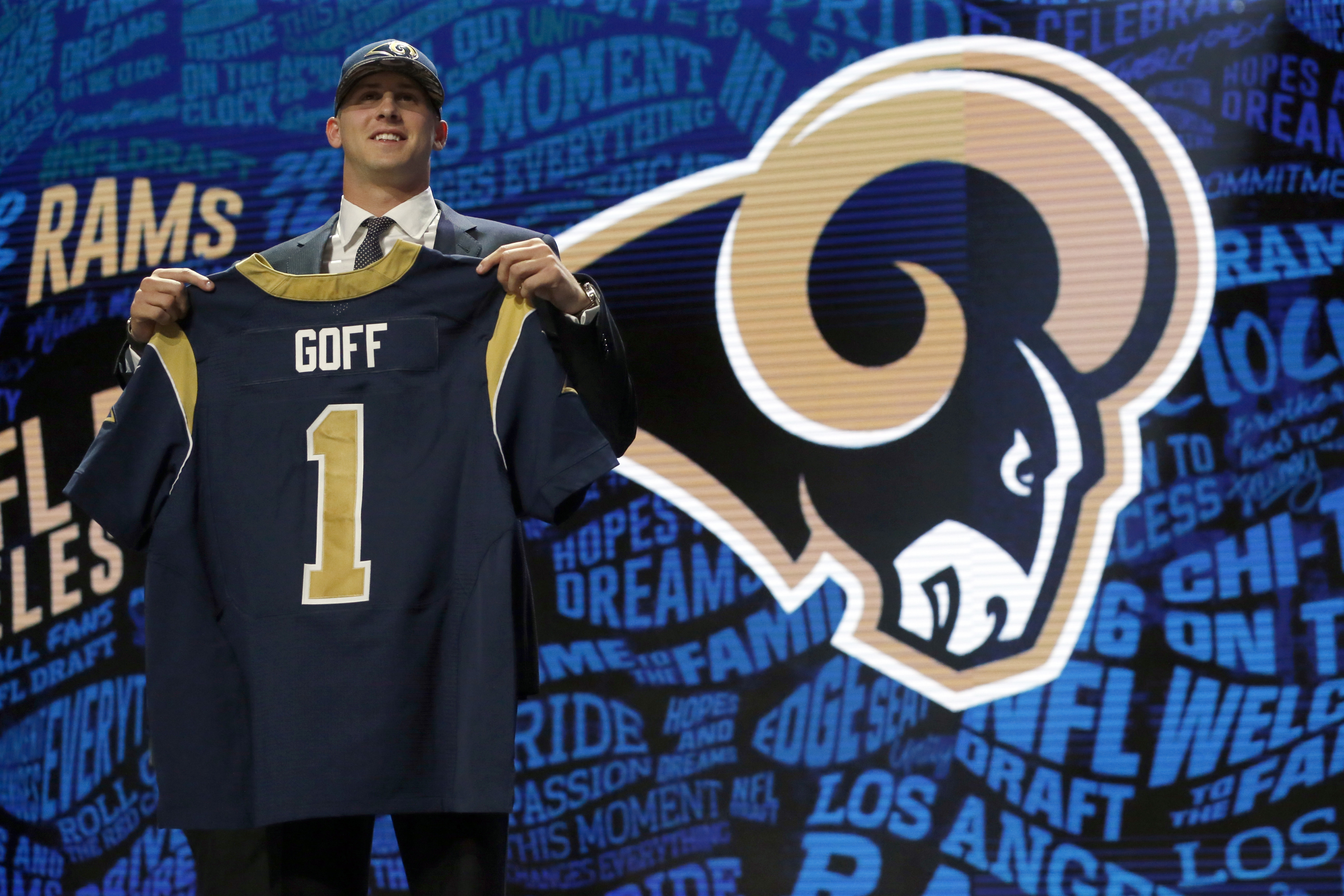 CHICAGO -- Jared Goff is moving down the West Coast to Los Angeles. Carson Wentz and his big right arm are moving from North Dakota to Philadelphia.

It's all about the quarterbacks at the top of the NFL draft.

Goff went No. 1 overall to the Rams on Thursday night for their first pick since they moved to Los Angeles in the offseason, and Wentz was the No. 2 selection by the Eagles after a successful career at North Dakota State in the second tier of college football.

"I'm taking it as an honor and something I'm going to have to prove them right, that they made the right decision," Goff said.

There was little doubt about the position of the top picks after Los Angeles and Philadelphia each made a big trade to get into the draft's top two slots. It's the second straight year two QBs were the first names off the board and the seventh time in the modern era of the draft since 1967.

The early big slide was experienced by Mississippi offensive tackle Laremy Tunsi. Once one of the leading candidates for the No. 1 pick before the trades, he slipped to Miami at No. 13 after a video posted to his Twitter account Thursday night showed someone apparently smoking marijuana out of a bong-gas mask contraption.

"We're trying to find out who did it," Tunsil said. "I am not worried about that right now. I'm blessed."

The Browns, who traded the No. 2 pick to the Eagles last week, moved down again in the first major deal of the night, swapping selections with Tennessee. Then Chicago acquired the No. 9 pick in a trade with Tampa Bay, prompting chants of "Let's go Bears! Let's go Bears!"

The Titans selected Michigan State offensive tackle Jack Conklin at No. 8 before the Bears grabbed Leonard Floyd, creating a bit of a lull in the proceedings with the Georgia linebacker not in attendance at the downtown Chicago theater.

On the board again at No. 15, Cleveland stayed in place and drafted Baylor wide receiver Corey Coleman.

After the QBs got their hats and exchanged pleasantries with Commissioner Roger Goodell, a pair of Ohio State stars made the stroll to the podium. San Diego grabbed defensive end Joey Bosa at No. 3 with the first real wild card of the night, and Dallas selected running back Ezekiel Elliott with the fourth pick.

Elliott, who rushed for 1,878 yards last season, made quite a fashion statement when he showed off his midsection while walking the red carpet before the draft. But his dress shirt under his blue suit was in place by the time he was drafted by the Cowboys.

"Dallas was definitely the place I wanted to go. It was like when I got to make my college decision," Elliott said.

San Francisco, which took Oregon defensive lineman Arik Armstead in the first round a year ago, went back to the Ducks for DE DeForest Buckner.

As the draft barreled toward the middle of the first round, UCLA linebacker Myles Jack kept tumbling down the board. There is concern within the league about the health of Jack's right knee.

The Buccaneers opted for cornerback Vernon Hargreaves III with the 11th pick. Hargreaves grew up in the Tampa area and played at Florida.

The 6-foot-4 Goff started every game during his three seasons at California and set school records with 977 completions, 12,220 yards passing and 96 touchdown passes. The Rams traded with Tennessee to get the pick.

Tupac's "California Love" took over the speakers at the downtown Chicago theater when Goff went No. 1.

"It's a good spot for me and for my family to come watch games," Goff said. "Very excited to get down there and get to work."

Wentz led the Bison to their fifth consecutive FCS championship in January. He passed for 1,651 yards and 17 touchdowns during his senior year that was shortened by a broken right wrist.

It's the first opening-round quarterback for the Eagles since they grabbed Donovan McNabb with the No. 2 pick in the 1999 draft.

"It's exciting a team believes in me that much to go up and get me," Wentz said.