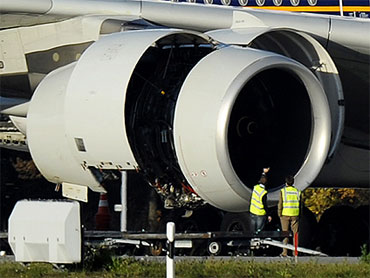 Qantas believes the engine that blew apart on the world's largest jetliner was probably designed or built incorrectly, the chief of the Australian airline said Friday, focusing attention on the engine's manufacturer, Rolls-Royce.

Hours after CEO Alan Joyce spoke, another Qantas plane with Rolls-Royce engines suffered an engine problem and turned back to Singapore's airport shortly after it took off for Sydney. Qantas said the problem with the smaller Boeing 747 was not serious and the flight was scheduled to take off again, 3½ hours late.

Rolls-Royce Group PLC did not comment on Friday's developments. Shares in the London-based aerospace, power systems and defence company, a business separate from the car manufacturer, were down 5.4 percent on the London Stock Exchange.

On Thursday, one of Qantas' six Airbus A380s suffered a massive engine failure in one of its four Rolls-Royce Trent 900 engines about four minutes into a flight to Sydney and shed pieces of metal over Indonesia before returning to make a safe emergency landing at Singapore's airport.

"We believe this is probably most likely a material failure or some type of design issue," Joyce told a news conference in Sydney. "We don't believe this is related to maintenance in any way." He said the engines had been maintained by Rolls-Royce since they were installed.

The double-decker A380 is the world's largest and newest airliner, tall as a seven-story building and capable of carrying 853 passengers, although most airlines use them to hold about 500 passengers. Its roomy first and business classes are seen as a major appeal for passengers.

Airbus has delivered a total of 37 since its debut in 2007. Twenty, operated by Qantas, Lufthansa and Singapore Airlines, use Trent 900 engines. All grounded those planes after the accident over Indonesia but Lufthansa and Singapore Airlines resumed flying them Friday after they passed safety inspections. Airbus said it had asked all airlines operating A380 planes with Rolls-Royce engines to carry out safety inspections "to ensure continuous safe operations of the fleet."

The 17 A380s operated by Emirates and Air France use engines from a different manufacturer.

The Australian Transport Safety Bureau is leading an investigation with help from Qantas, Airbus, Rolls-Royce and aviation authorities in several countries. Ian Sangston, the bureau's general manager of air safety investigation, said the faulty engine was being removed for inspection and the flight data and cockpit voice recorders were being analyzed in Australia.

Investigators also hoped to recover more than 100 pieces of debris, some as large as doors, scattered across Indonesia's Batam island. The agency will issue a preliminary report by Dec. 3, though the full investigation could take one year, Sangston said.

Uncontained engine failures, where high-energy debris from the rotating parts break through the engine casing, have become especially rare due to improvements in design and metallurgy.

They usually are caused by engines sucking in objects like runway debris or a bird, or maintenance crews failing to replace parts that wear out.

William Voss, head of the Flight Safety Foundation based in Alexandria, Virginia, said it appeared credible that a design or construction flaw was the cause in this case.

Maintenance failures are very rare in engines as new as the one that failed, which was built two years ago, he said. And a foreign object would like have caused visible damage to the outside cover of the engine or the huge fan — or turbine — at the front of the engine.

He said he thought it was most likely that the Qantas flight was hit by a failure in the area that contains the turbine section and other rotating parts.

"This runs at extremely high temperatures and at very high, even supersonic, speeds. In that environment any minute manufacturing defect or a fault in the metallurgy such as microscopic cracks can lead to a failure," he said.

He said if the problem was shared by all Trent 900 engines he believed it would have been be caught very quickly in the inspections.

The Qantas problem was the most serious midair incident involving the A380.

The European Aviation Safety Agency has issued orders twice this year advising airlines about extra inspections or repairs needed to deal with potential problems with the Trent 900.

Joyce said such directives are commonplace — an airline could receive 100 per year across a range of planes — and that Qantas was in full compliance with them.

One August order indicated that routine wear could cause the turbine discs — rings the turbine blades are attached to — to come into contact with stationary parts of the engine, resulting in an in-flight shutdown, or even an oil fire.

EASA spokesman Jeremie Teahan said the agency did not believe that problem could lead to a break-up of the type that occurred Thursday.

However, a news media photo of engine debris indicates that a a turbine disc — may have failed, said John Goglia, a former National Transportation Safety Board member and an expert on aircraft maintenance.

A photo posted online by The Australian newspaper shows a turbine disc broken nearly in half, its blades missing. The location of the break appears to indicate that it was the disc that failed, Goglia said. The photo also doesn't show any signs of discoloration on the disc that would indicate overheating, he said.

There are several reasons why by a disc might fail, but they usually involve the material used to make the disc or the manufacturing method, Goglia said. He cautioned that he was looking at one photo, which was not enough information to make a definitive judgment.