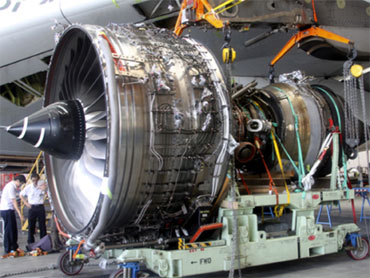 Nobody trains for chaos like this. Out the pilots' left window, far above the ocean, an engine as big as a bus had disintegrated, blasting shrapnel holes in the superjumbo's wing. And now an overwhelming flood of computer alarms was warning the pilots that critical systems might be failing.

Two weeks after the pilots somehow landed their Qantas jetliner and its 450 passengers, their two-hour cockpit drama was described Thursday in an interview with The Associated Press by the vice president of the Australian and International Pilots Association.

"The amount of failures is unprecedented," said Richard Woodward, a fellow Qantas A380 pilot who has spoken to all five pilots. "There is probably a one in 100 million chance to have all that go wrong."

Engine pieces sliced electric cables and hydraulic lines in the wing. Would the pilots still be able to fly the seven-story-tall plane?

The wing's forward spar — one of the beams that attaches it to the plane — was damaged as well. And the wing's two fuel tanks were punctured. As fuel leaked out, a growing imbalance was created between the left and right sides of the plane, Woodward said.

The electrical power problems prevented the pilots from pumping fuel forward from tanks in the tail. The plane became tail heavy.

That may have posed the greatest risk, safety experts said. If the plane got too far out of balance, the Singapore-to-Sydney jetliner would lose lift, stall and crash.

And then there was that incredible stream of computer messages, 54 in all, alerting the pilots to system failures or warning of impending failures.

One warned that a ram air turbine — a backup power supply — was about to deploy, although that never did happen, Woodward said. The message was especially worrisome because the system deploys only when main power systems are lost. The smaller backup supply is able only to power vital aircraft systems.

That is "the last thing you need in that kind of situation," he said.

The pilots watched as computer screens filled, only to be replaced by new screenfuls of warnings, he said.

"I don't think any crew in the world would have been trained to deal with the amount of different issues this crew faced," Woodward said.

As luck would have it, there were five experienced pilots — including three captains — aboard the plane. The flight's captain, Richard de Crespigny, was being given his annual check ride — a test of his piloting skills — by another captain. That man was himself being evaluated by a third captain. There were also first and second officers, part of the normal three-pilot team. In all, the crew had more than 100 years of flying experience.

De Crespigny concentrated on flying the plane, while the others dealt with the computer alarms and made announcements to the giant planeload of passengers, some of whom said they were frantically pointing to flames streaming from the engine. Working flat out, it took 50 minutes for the pilots work through all of the messages.

When pilots receive safety warnings, they are supposed to check the airline's operating manual and implement specific procedures. But with so many warnings, the Qantas pilots had to sort through and prioritize the most serious problems first.

It is likely that for some of the problems there were no procedures because no airline anticipates so many things going wrong at once, John Goglia, a former National Transportation Safety Board member said.

Attention since the Nov. 4 incident has focused on the Airbus 380's damaged Rolls Royce engine. As many as half of the 80 engines that power A380s, the world's largest jetliners, may need to be replaced, Qantas CEO Alan Joyce said Thursday. That raises the possibility of shortages that could delay future deliveries of the superjumbo.

Qantas has grounded its fleet of six A380s.

The drama two weeks ago still wasn't over when the pilots finally got the plane back to Singapore and the runway was in sight.

Wing flaps that are used to slow the plane were inoperable. So were the landing gear doors. The pilots used gravity to lower the gear.

Brake temperatures reached over 1,650 degrees Fahrenheit (900 Celsius) during the landing, causing several flat tires. If fuel leaking from the damaged wing had hit the brakes, it could have caused a fire. The pilots allowed the plane to roll almost to the end of the runway so it would be close to fire trucks that could put foam on the brakes and undercarriage.

Among the other issues Woodward said the pilots faced:

When the engine failed it caught fire, but the fire suppression system was difficult to deploy.

An electrical bus — a connection between electrical devices — on the left wing failed. The plane was designed so that a second bus on the same wing or the two buses on the opposite wing would pick up the load. That didn't happen.

Actually, Woodward praised the plane, saying it was a testament to its strength that it was able to continue to fly relatively well despite all the problems. But he also said it's likely reconsideration will be given to the design and location electrical wiring in the wings.

Airplanes are supposed to be designed with redundancy so that if one part or system fails, there is still another to perform the same function. That didn't always happen in this case, safety experts say.

"The circumstances around this accident will certainly cause the regulatory authorities to take a long and hard look at a number of certification issues," said Goglia, the former National Transportation Safety Board member and an expert on aircraft maintenance.

"What we have got to ensure is that systems are separated so that no single point of failure can damage a system completely," Woodward said. "In this situation the wiring in the leading edge of the wing was cut. That lost multiple systems."

However, Michael Barr, who teaches aviation safety at the University of Southern California, said a commercial plane cannot be designed with certainty to withstand a spray of shrapnel, which can inflict damage anywhere. The proper focus, he said, should be on determining what caused the engine to fail and fixing that problem.

All the experts were agreed on one point.

"It must have been an exciting time on that flight deck," Barr said drily. "It's not something you'd ever want to try again."

Canada's Trudeau re-elected PM but his Liberals don't get majority