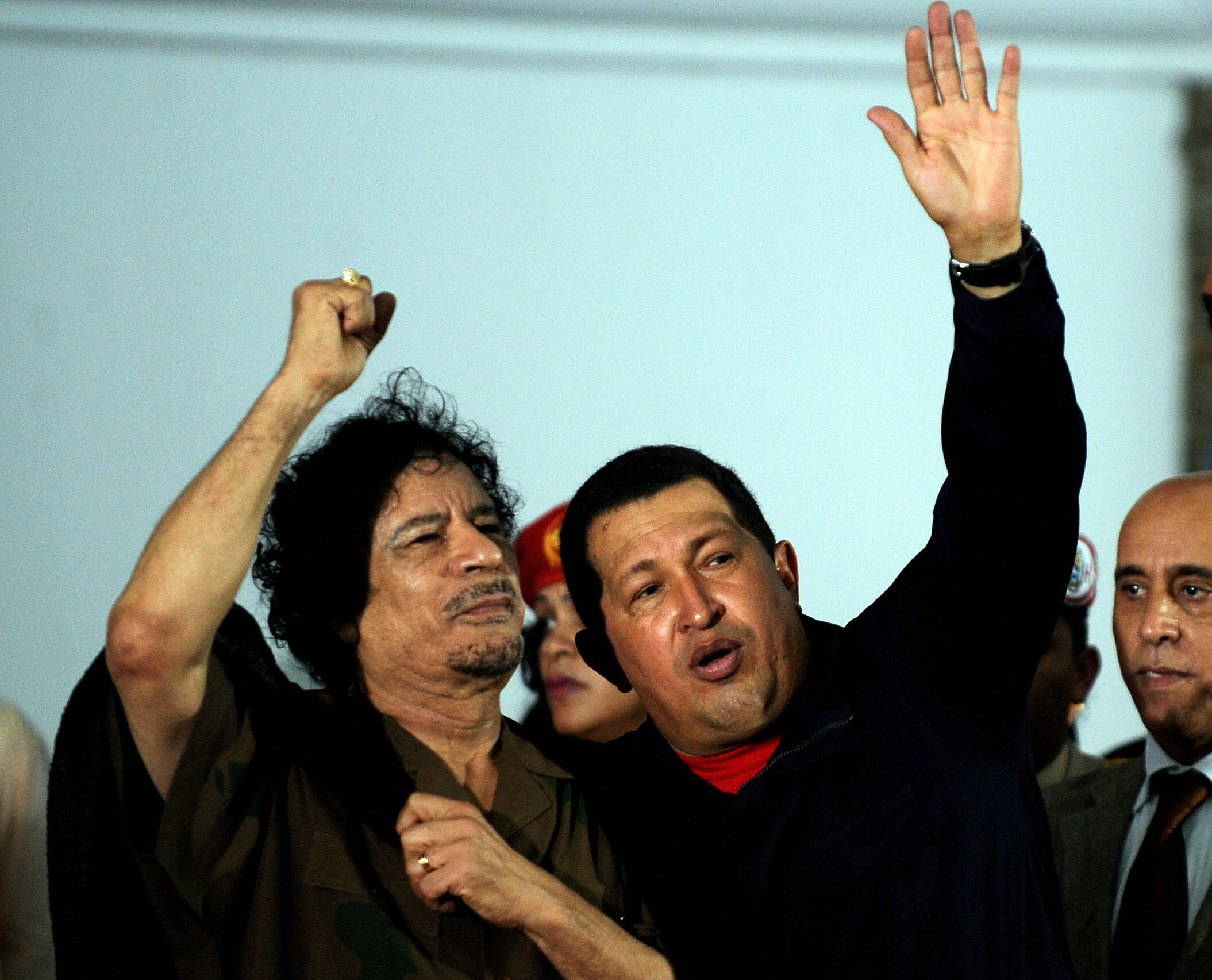 If Washington is apt to see the recent uprisings in the Middle East--against U.S. allies like Egyptian president Hosni Mubarak as well as adversaries like the Islamic Republic of Iran--in terms of challenges to and opportunities for U.S. strategic interests, Venezuelan president Hugo Chávez sees nothing but an opening to boost his own Bolivarian brand.

Consider Chávez's stance toward his OPEC colleague Muammar Qaddafi. Early during the fighting in Libya, there were rumors, maybe even floated by Chávez himself, that the Libyan dictator was about to flee to Venezuela. The government-friendly Venezuelan press speculated that when Qaddafi arrived he would be bearing with him the replica of Simón Bolívar's sword that Chávez gave him in 2009 when he bestowed on his "revolutionary brother" the Order of the Liberator, Venezuela's highest civilian honor. "What Simón Bolívar is to the Venezuelan people," said Chávez, "Qaddafi is to the Libyan people."

When Qaddafi started bombing the Libyan people, and showed that he was not going anywhere, the Venezuelan ruler adjusted accordingly, offering to mediate between the colonel and his rivals. Aides to Chávez said Qaddafi accepted the proposal, though his son did not, and, not surprisingly, the rebels rejected his offer, as has the entire international community. But Chávez is hardly finished meddling in the Middle East, for the relationship between that region's state sponsors of terror and the countries under the influence of Chávez's Bolivarian Revolution is more than just a puppet show. The irony is that if the Venezuelan strongman isn't careful, those Middle Eastern revolts might come back to haunt him.

Of course, Libya isn't the only rogue state under internal pressure that Chávez has warmed to. Venezuela has assiduously nurtured its relationship with Iran such that the Caracas-Tehran alliance may now represent the greatest threat to stability in Washington's direct sphere of influence.

Chávez and Ahmadinejad call each other "brothers" and last year signed 11 memorandums of understanding for, among other initiatives, joint oil and gas exploration, as well as the construction of tanker ships and petrochemical plants. Chávez's assistance to the Islamic Republic in circumventing U.N. sanctions has got the attention of the new Republican leadership of the House Foreign Affairs Committee. Ileana Ros-Lehtinen and Connie Mack (both R-FL) have said they intend to launch an investigation into the Venezuelan state oil company Petróleos de Venezuela, S.A. (PDVSA). In July, the EU ordered the seizure of all the assets of the Venezuelan International Development Bank, an affiliate of the Export Development Bank of Iran (EDBI), one of 34 Iranian entities implicated in the development of nuclear or ballistic technology and sanctioned by the Treasury Department. In the meantime, Tehran and Caracas have announced that PDVSA will be investing $780 million in the South Pars gas field in southern Iran.

Another key aspect of the two countries' strategic relationship is uranium exploration. Iran is reportedly helping Venezuela find and refine its estimated 50,000 tons of uranium reserves--a deal modeled after Caracas's arrangement with Moscow, which has already signed agreements to build two 1,200-megawatt reactors in Venezuela. And then there's terrorism and the role that Hezbollah, Iran's Lebanese-based asset, plays in the relationship. Hezbollah's past work in Latin America includes its alleged involvement in two Buenos Aires bombings--the 1992 attack on the Israeli embassy and the 1994 bombing of a Jewish community center. And now, reports are surfacing that Venezuela has provided Hezbollah operatives with Venezuelan national identity cards--a concern raised in the July 27, 2010, Senate hearing for the recently nominated U.S. ambassador to Venezuela, Larry Palmer.

Elsewhere in Latin America, Iran has developed significant relationships with Chávez's allies and fellow Bolivarian Revolutionaries, Bolivia's Evo Morales, Ecuador's Rafael Correa and Nicaragua's Daniel Ortega. For instance, in December 2008 the EDBI offered to deposit $120 million in the Ecuadorean Central Bank to fund bilateral trade, and Iran and Ecuador have signed a $30 million deal to conduct joint mining projects in Ecuador through the Chemical-Geotechnical-Metallurgical Research Center in Ecuador. Even as that deal carefully avoids mentioning uranium, the IAEA's March 2009 plans to help Ecuador explore its vast uranium reserves were largely intended to highlight and preclude Iranian involvement. In February 2010 the Paris-based Financial Action Task Force, a multilateral organization that combats money laundering and terrorist financing, placed Ecuador on a list of countries that failed to comply with its regulations.

The problem for Chávez and the Bolivarians is that in aligning themselves with Middle Eastern rogue states they may have made a bad bet. To be sure, even if Chávez loses Tripoli and Tehran as allies, instability in the Middle East will raise demand for Venezuela's higher-sulfur heavy crude, and the spike in price will help solidify his hold on power as he approaches the 2012 elections. But insofar as Middle Easterners have been inspired by the examples of their peers--from Tunisia to Bahrain and Libya to Iran--there is no reason that Latin Americans should not be similarly moved to go to the streets to demonstrate against their own repressive regimes. Indeed, the signs do not augur well for the Bolivarians.

Recently, 63 Venezuelan students went on a hunger strike to protest Chávez's human rights record, his repression of the country's opposition parties, and his gutting of independent state institutions. They campaigned for international pressure to support the release of high-profile political prisoners, including judges, opposition officials, and members of the national assembly.

As another representative from Venezuela's National Assembly, Maria Corina Machado, recently told me:

The building of the society we dream about will be done by us Venezuelans, but we do ask the world not to make it more difficult for us, not to legitimize a regime that consistently violates human rights. Venezuelans have a right to raise their voices in protest and demand that other countries not be complicit. What we want is for the true nature of the Venezuelan regime to be recognized, that they have violated all the pillars of a democratic system: There's no respect for human rights, no separation of powers, and recurrent violation of the constitution.

Chávez and his Bolivarian colleagues are on notice--if an Arab tyrant in exile disdains refuge in Venezuela, there's plenty of space for Latin American despots alongside ousted Arab rulers in the deserts of Saudi Arabia.

Bio: Vanessa Neumann is editor-at-large of Diplomat magazine and a commentator on Latin American politics for Caracol radio.

​Schieffer: How the terrorists hurt their own cause

Fewer Americans see climate change as priority than they did a year ago
Thanks for reading CBS NEWS.
Create your free account or log in
for more features.
View CBS News In
CBS News App Open
Chrome Safari Continue
Be the first to know
Get browser notifications for breaking news, live events, and exclusive reporting.