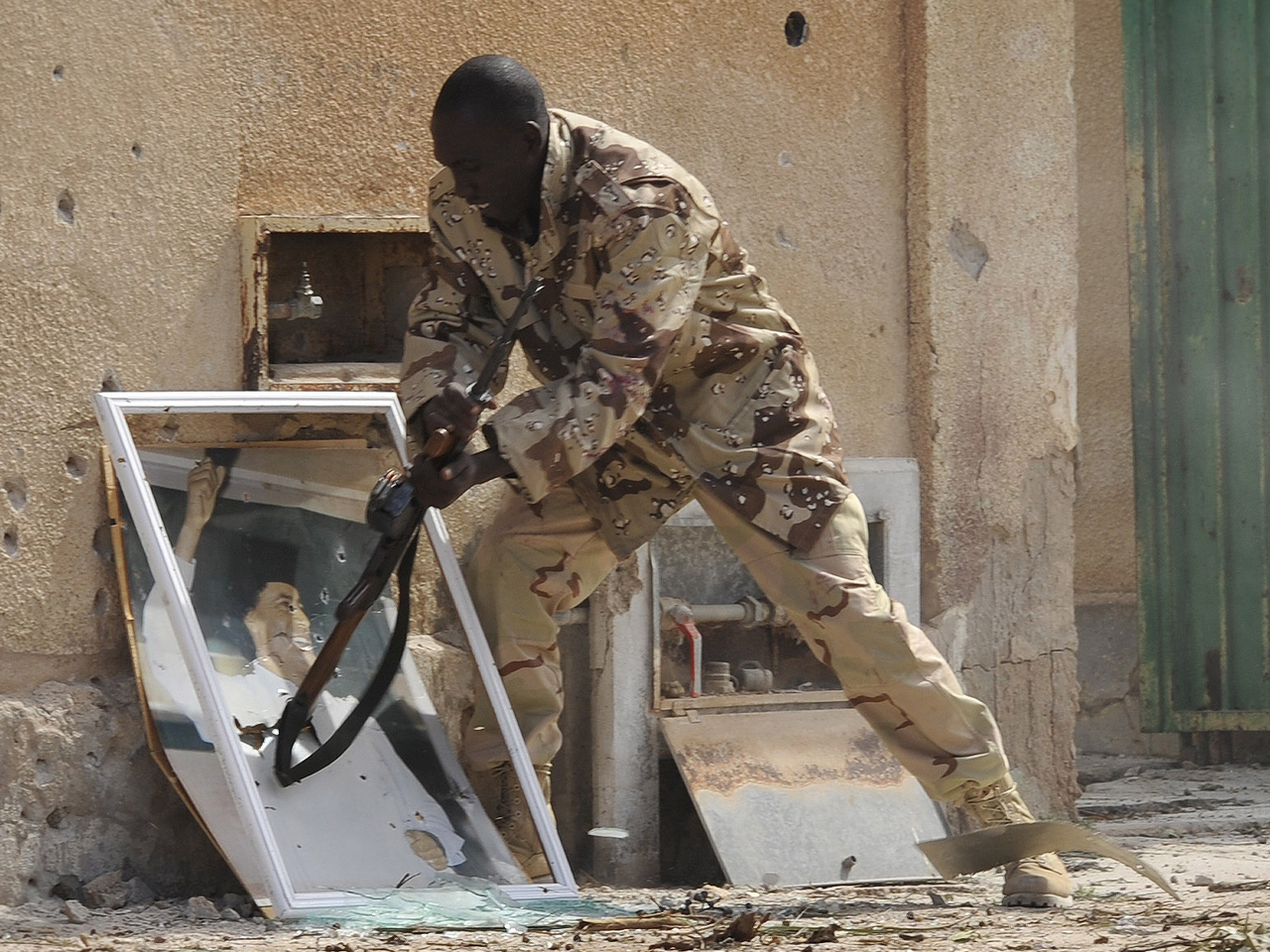 SIRTE, Libya - Libya's revolutionary forces have seized a convention center that had served as a key base for fighters loyal to Muammar Qaddafi in the fugitive leader's hometown, as they squeezed remaining regime loyalists in the besieged coastal city.

The inability to take Sirte, the most important remaining stronghold of Qaddafi supporters, more than six weeks after anti-Qaddafi fighters seized the capital has stalled efforts by Libya's new leaders to set a timeline for elections and move forward with a transition to democracy.

Qaddafi supporters also hold the inland enclave of Bani Walid, where revolutionary forces also reported key gains after weeks of faltering advances that resulted in part from the challenging terrain of desert hills and steep valleys. Bani Walid is believed to be harboring high-level figures in the old regime.

The transitional leadership has said it will declare liberation after Sirte's capture because that will mean it holds all of the seaports and harbors in the oil-rich Mediterranean coastal country.

In spite of the revolutionary forces' optimism, CBS News correspondent Allen Pizzey reports from the outskirts of Sirte that fighting inside the key town has slowed to a murderous grind of street to street battles, plagued by poor organization and command structure. The overnight casualty count was close to a dozen dead and more than a score wounded, mainly by snipers and rocket propelled grenades, says Pizzey. There is no shortage of weapons and ammunition but the fighters, organized into what are called Katib's or Brigades, answer only to themselves. Pizzey reports that on Sunday, one Katib advancing from the east and one from the west ended up shooting at each other amid the chaos in Sirte.

"I do believe, God willing, that the liberation of these cities will happen within this week," Abdul-Jalil told reporters in Tripoli.

He said that revolutionary forces in Sirte have punched their way into the city center in fierce fighting and are now cleaning out pockets of resistance.

In Bani Walid, advancing fighters drove Qaddafi forces out of the airport, said Abdullah Kenshil, who led failed talks for the revolutionaries in search of a peaceful surrender of the city.

"The takeover of Bani Walid is imminent," he said. "The fighters are only one kilometer from the heart of Bani Walid."

He claimed that Qaddafi's son Seif al-Islam was seen on Saturday distributing cash to his loyalists in Bani Walid. "We are 100 percent sure that he is inside, at least until last night," Kenshil said.

Located 250 miles southeast of Tripoli, Sirte is key to the physical unity of the nation of some 6 million people, since it lies roughly in the center of the coastal plain where most Libyans live, blocking the easiest routes between east and west.

After a three-week siege from the outskirts, revolutionary forces launched an all-out assault on Sirte on Friday, pounding the city with tank shells, field cannons, rockets and heavy machine guns. Loyalists have put up fierce resistance, and fired back with sniper rifles, mortars and rocket-propelled grenades.

On Sunday, the Ouagadougou Convention Center, an ornate complex that Qaddafi frequently used for international summits, lay in ruins. Throughout the siege, Qaddafi fighters used the walled complex as a base and stronghold. From there they were able to dominate surrounding neighborhoods and assault revolutionaries trying to enter Sirte.

At the nearby Ibn Sina Hospital, scores of wounded civilians crowded the corridors, lying on gurneys and floors to protect them from the shelling and gunfire. There was no electricity or water, and a handful of medical students and nurses were the only medical staff.

Revolutionary fighters roamed the hallways checking IDs and detained about 25 people suspected of being Qaddafi fighters or mercenaries.

"These are all Qaddafi people. They are snipers and we have captured them," said Ahmed Rahman, a field commander, as his soldiers cuffed a suspected pro-Qaddafi sniper.

The revolutionary forces also now control the University of Sirte on the southern outskirts. As they push forward, Qaddafi loyalists are fighting in an ever-shrinking defensive perimeter consisting only of a Qaddafi palace complex, some residential buildings and a hotel near Green Square in the city center.