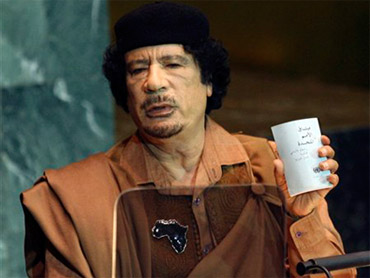 Updated at 3:17 p.m. EDT
In his first appearance at the United Nations, Libyan leader Muammar Qaddafi railed against the Security Council, saying it should be called the "Terrorism Council."

After briefly congratulating President Barack Obama on his first U.N. appearance as president, Qaddafi launched into an attack of the U.N. charter and the makeup of the Security Council, saying the institutions are outdated and unfair. The Libyan president said the U.N.'s General Assembly was "like a décor" for the permanent members of the Security Council.

The five permanent members of the Security Council are China, France, Russia, the United Kingdom and the United States. All five hold veto powers. There are an additional 10 rotating members, including Libya, whose membership ends this year.

"This is terrorism," Qaddafi said through a translator. "Anyone who says 'I am higher than the General Assembly' should leave and be alone."

The Libyan leader's speech ran 1 hour and 36 minutes, no threat to the record set by Cuban leader Fidel Castro in 1960, at 4 1/2 hours. Speakers are supposed to limit themselves to 15 minutes.

Read more of CBSNews.com's coverage of the U.N. General Assembly:

Qaddafi praised Mr. Obama as "a son of Africa" and said the world would be happy if Obama remained president forever.

"You are the beginning of a change," the Libyan leader said. "Obama is a glimpse in the dark."

In addition to suggesting that the U.N. charter be re-written, Qaddafi proposed that meetings of the General Assembly be moved from New York to a country in the eastern hemisphere. He said this would help relieve some of the jet-lag the leaders feel traveling to New York and also free the United States from the security issues surrounding General Assembly meetings.

"Perhaps America will be targeted again, perhaps by a rocket and tons of heads of state will die," Qaddafi said, explaining his proposal.

Qaddafi's exhaustion may have been complicated by his uncertain sleeping arrangements. He apparently intended to stay in his Bedouin tent in the suburban Westchester town of Bedford on property leased from Donald Trump, but ended up staying at the Libyan U.N. Mission in Manhattan instead.

Qaddafi had wanted to pitch a tent at Libya's five-acre estate in Englewood, New Jersey, and live and entertain there during the U.N. assembly. But local opposition turned him away.

His speech followed President Obama's first General Assembly address, but not before a recess of some 15 minutes was called by the Libyan president of the General Assembly so diplomats could take new seats.

Qaddafi, introduced as the "king of kings" by assembly president Ali Treki, remained in his seat for long after the introduction.

After waiting for the room to be settled, Qaddafi rose and swept his robe over him and strode to the stage, using the handrail on his way up. He wore a shiny black pin in the shape of Africa pinned over his heart, on his brown and tan Bedouin robes.

Qaddafi laid the yellow folder in front of him and opened some of the handwritten pages as he received scattered applause.

The U.S. Mission was represented by two low- to mid-ranking diplomats. U.S. Secretary of State Hillary Rodham Clinton and U.S. Ambassador Susan Rice departed before Qaddafi ascended the podium. Israel's U.N. delegation walked out on him as well. Iranian President Mahmoud Ahmadinejad stayed on, but left before the speech ended.

The chamber was half-empty as Qaddafi gave his first speech and held a copy of the U.N. Charter in his hands, each with a large, shiny ring. For a moment, it seemed he lost his place in his speech while he sorted through the pages of his yellow folder.

He appeared to be speaking without a text, looking at a set of notes before him on handwritten pages. He was not reading from the TelePrompTer.

Ninety minutes into Qaddafi's speech, the exhausted English-language interpreter was relieved by another simultaneous translator.

Fatigue may have been endemic. Well into Qaddafi's rambling speech, more than half the General Assembly seats were empty as the lunch hour arrived. Delegates had begun walking out after Qaddafi's reference to the Security Council as the "terror council."

Also Wednesday, the Senate unanimously passed a resolution condemning the release of Abdel Baset al-Megrahi, a Libyan who was convicted for his role in the bombing of a Pan Am airplane over Lockerbie, Scotland.

The Lockerbie bombing killed 270 people, the majority of them Americans. Last month, a Scottish official ordered the release of al-Megrahi, who has prostate cancer. When al-Megrahi arrived in Libya he was greeted as a hero.

The Senate resolution also calls on Libya to apologize for the celebrations of al-Megrahi's release.

Qaddafi will likely face protests over Scotland's release of al-Megrahi.