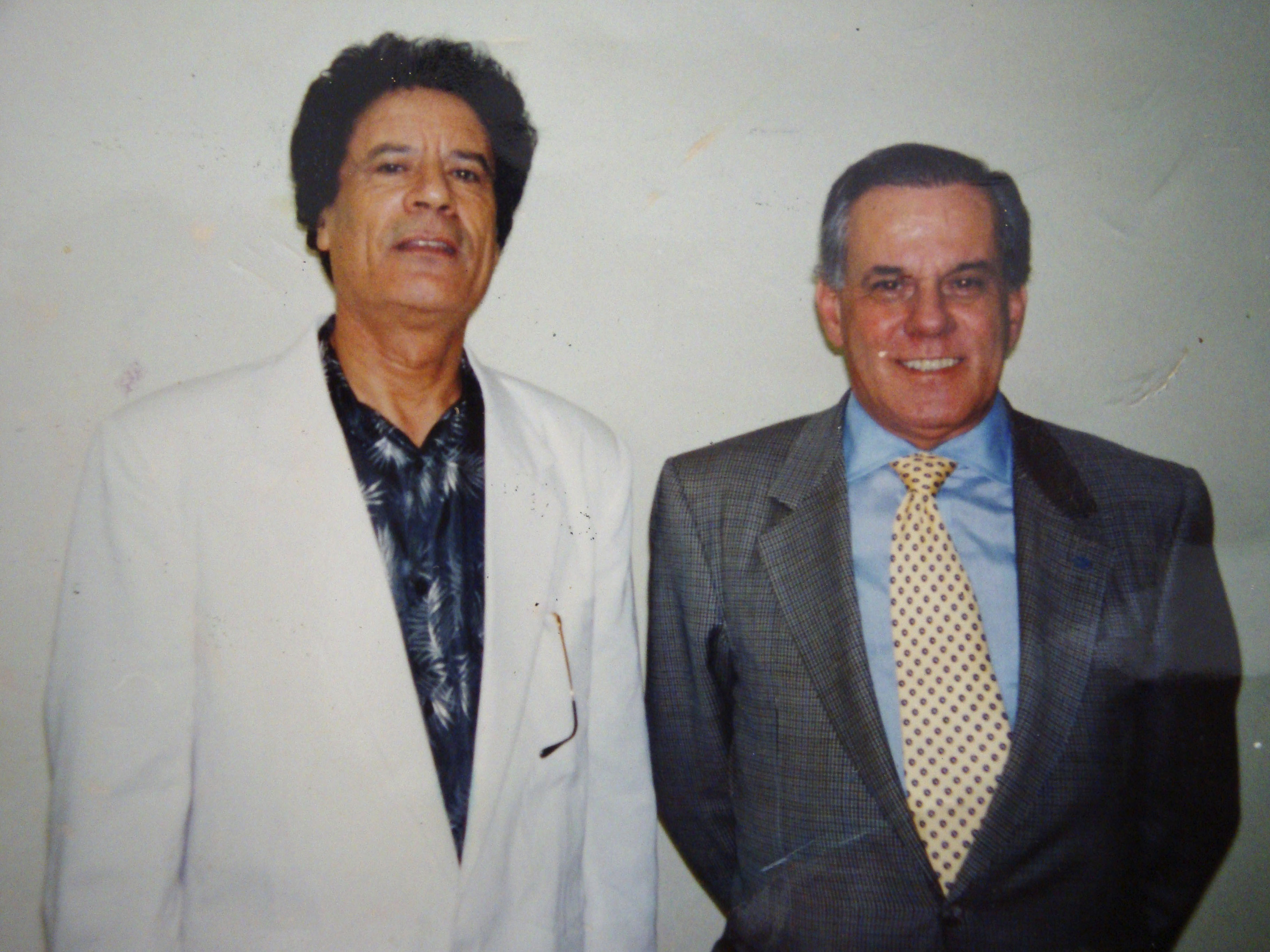 SAO PAULO - It was well past midnight when the Brazilian surgeon says he was escorted deep inside a bunker in the Libyan capital.

His assignment: to shave years off Muammar Qaddafi's appearance by removing fat from his belly and injecting it into his wrinkled face. The Libyan leader also got hair plugs.

"He told me that he had been in power for 25 years at that time, and that he did not want the young people of his nation to see him as an old man," Dr. Liacyr Ribeiro recalled. "I recommended a facelift, but he refused."

The secretive four-hour procedure in 1995 was done, at Qaddafi's insistence, with local anesthesia because he wanted to remain alert. Midway through, the Libyan leader stopped to have a hamburger.

Qaddafi was worried a facelift would be too noticeable, so he opted for the less radical procedure, the plastic surgeon told The Associated Press.

"I warned Qaddafi that the effects of the operation I performed would last for about five years, that it had an expiration date after which the skin would sag and the wrinkles would reappear," Ribeiro said.

"He said he would call me if he needed me to come back," and about five years ago there was such a request, but Ribeiro had a family obligation. "They never called me again," he said.

At the time of the surgery, Qaddafi was 53, but Ribeiro said he looked at least 10 years older. A photo taken at the time shows the smiling doctor posing next to the Libyan leader, who wore a white suit, floral shirt and had pronounced wrinkles crisscrossing his face and neck.

After the procedure, "he looked like a 45-year-old man," the doctor said.

Ribeiro insists he is speaking out now only to provide insight into a man about whom little is known, and certainly not to boast.

"Qaddafi is not looking very good these days," said Ribeiro, noting that the 68-year-old leader has appeared jowly in recent appearances, his skin puffy, loose and deeply creased. "To let potential patients know that I operated on him would be counterproductive."

Qaddafi is hardly the only world leader to go under the knife.

Italian Premier Silvio Berlusconi owes his look to plastic surgery and a hair transplant — work also performed by Ribeiro, according to media reports, though the doctor refuses to confirm that. And rumors swirled about Russian leader Vladimir Putin after he appeared last October with heavy makeup covering bruises under his eyes.

A surgeon with an international reputation, the 70-year-old Ribeiro has written two books on plastic surgery and taken part in conferences around the world on the topic.

It was at one such gathering, in May 1994 in Tripoli, that Ribeiro spoke about his specialty, cosmetic breast surgery.

Afterward, a Libyan official identified as Mohamed Zaid "came up to me and said he wanted me to meet someone who Libyans love very much," Ribeiro said. "Because of my specialty, I thought he was going to introduce me to his wife."

Instead, Zaid drove Ribeiro to a house surrounded by armed guards.

"Zaid and I were taken to a library located underneath a tent set up inside the house, and there he told me that he wanted me to examine Qaddafi," Ribeiro said.

"He was an extremely polite, intelligent, cordial and soft-spoken person who quickly told me what he wanted and why," Ribeiro said.

Qaddafi wanted an immediate operation, but Ribeiro needed a surgical team and the procedure was scheduled for January 1995.

It began at 2 a.m. in Qaddafi's bunker, which "had two fully equipped and very modern operating rooms, a gym and a swimming pool," Ribeiro said.

"He insisted on local anesthesia saying he wanted to remain alert," the doctor added. "He was a very calm patient."

Sao Paulo-based plastic surgeon Dr. Fabio Naccache confirmed to the AP that he was part of the team and performed a hair transplant on the Libyan leader.

About halfway through, Qaddafi said he was hungry.

"Hamburgers were brought in for all and surgery was interrupted for several minutes while we ate," the surgeon said.

Afterward, Zaid handed Ribeiro an envelope "full of U.S. dollars and Swiss francs." He would not say how much money it contained.

"All I can say is that it was more than I would charge for my services in Brazil," he said.

The doctor stayed in Tripoli for 10 days while Qaddafi recovered.

Ribeiro said he assumes Qaddafi turned to him because Libyan surgeons were either "incapable of doing what I did or too scared that he would die on the operating table."