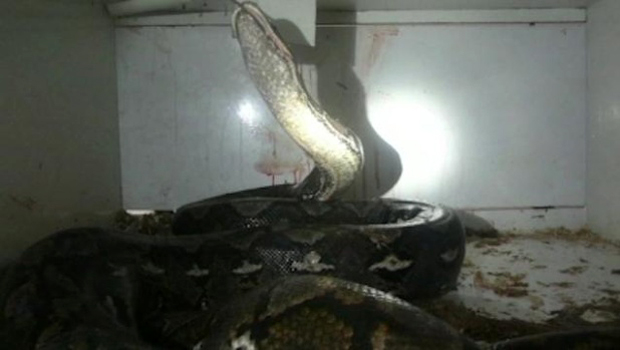 NEWPORT, Ky. -- Police officers pried off a 20-foot python that was crushing the owner of a northern Kentucky reptile store.

"It was like watching a horror movie," Melissa McElfresh told CBS Cincinnati affiliate WKRC-TV. "A horror movie in real life is all that was."

McElfresh said she ordinarily has no fear of the python. But on Monday her thoughts on the animal changed while she was helping Wilkins.

In an instant, the python bit Wilkins.

"As he falls back, blood is gushing everywhere," Newport Police Chief Tom Collins told WKRC-TV, "and he falls to the ground, and the snake wraps around him from his torso to his neck."

"I see him laying on the ground," Sgt. Daron Arnberg told WKRC-TV. "I see a puddle of blood. He looks lifeless."

Collins says Wilkins wasn't breathing when officers were trying to free him, but he did resume breathing before he was taken to a hospital.

WKRC-TV reports Wilkins was treated and released later in the day from University Hospital in Cincinnati.

Collins said one of the two responding officers, Lt. Gregory Ripberger, knew to uncurl the snake by grabbing it from its head, eventually freeing Wilkins.

Police were working with animal control to determine if the python would need to be removed from the shop.