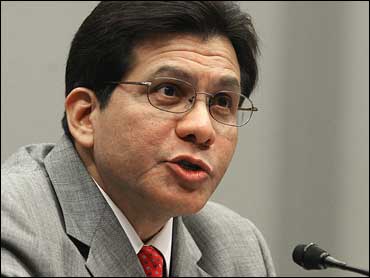 New York Senator Chuck Schumer has for some weeks been calling for a vote of "no confidence" in Attorney General Alberto Gonzales. And it looks like he may get one — or, to be more precise, the start of a process that could lead to one — on Monday.

But don't bet that the Senate will hold the scandal-plagued Gonzales to account.

In fact, the real issue will be holding senators to account.

A no confidence vote of the sort Schumer proposes lacks the authority, official or even symbolic, that attaches to such votes in parliamentary democracies.

All Schumer's vote would really do is force members of the Senate to go beyond rhetoric and actually cast a vote that says they have lost faith in the ability of this attorney general to manage the Department of Justice or to deal honestly with Congress. That might be enough to shame Gonzales into quitting, but that's assuming that the attorney general can be shamed.

This does not mean that Schumer, the Judiciary Committee Democrat who has been most aggressive in going after the high crimes and misdemeanors of Gonzales, lacks sincerity.

He believes that "We ought to be doing everything we can to get a new attorney general" — which is, of course, right.

And he is motivated by more than mere animus toward Gonzales. Schumer recognizes that, with the attorney general in full bunker mode and with top staffers and career attorneys quitting the DOJ at an unprecedented race, "No one is running the [Justice] Department."

The crisis created by Gonzales has spun out of control. Even conservative Republicans in the Senate recognize it, as they do the fact that only the departure of a lawless and dysfunctional attorney general will begin to set things right. "The bottom line is the only person who thinks the attorney general should remain attorney general is the president," say Schumer. "He's gotten virtually no support from even Republicans in the Senate, just a handful have supported him, six have called for him to step down, a dozen more have said very negative things about him."

Unfortunately, the petty partisanship that characterizes George Bush's Washington is all but certain to take the wind out of Schumer's no-confidence push. The White House is aggressively lobbying against it. And most of the Republicans who have criticized Gonzales — including Oklahoma Senator Tom Coburn, who so pointedly told the attorney general to resign — say they won't support Schumer's efforts to schedule a formal Senate vote on the question of whether the attorney general retains the respect of the chamber that approved his nomination to move from the White House to the Justice Department.

To schedule the no-confidence vote, Schumer will need the agreement of 60 senators to invoke cloture, which would limit debate and bringing the resolution to a vote. Getting to 60 votes in a Senate with 49 Republicans and a several White House-friendly "Democrats" is unlikely.

But the cloture vote will show where senators stand at a point when the Justice Department is in disarray. Do they want to fix things, or are they more interested in playing the political games of a White House that could care less about maintaining basic functioning within Justice?

If Republican senators who admit that Gonzales is a disaster were to do the right thing, this could be a turning point. Though a no-confidence vote carries no official sanction, if the Senate were to simply schedule such a vote, the attorney general would be forced to respond with something more than his usual doubletalk.

The ranking Republican on the Senate Judiciary Committee, Pennsylvania's Arlen Specter, has said that he thinks the response to the mere threat of a no-confidence vote would be a resignation. Referring to the prospect of "a forceful, historical statement" of no confidence, Specter says, "I think that if and when (Gonzales) sees that coming, that he would prefer to avoid that kind of an historical black mark."

Unfortunately, the signals at this point suggest that Republicans who have told Gonzales to leave will prevent the "forceful, historical statement" that is needed to prod the attorney general. As a result, the Senate and House Judiciary committees will be forced to continue the painstaking pursuit of the additional evidence — which the White House refuses to hand over — that will end Alberto Gonzales' reign of error. And the crisis at the Department of Justice will continue to metastasize.