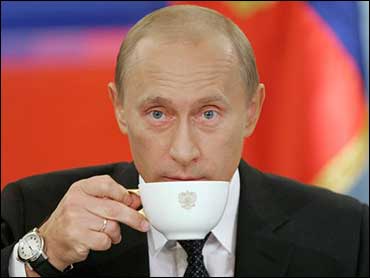 Beth Knobel is the Moscow Bureau Chief for CBS News. Before joining CBS, she earned a Ph.D. in Public Policy with emphasis on press and politics.


Things in his country are looking pretty rosy to Russian President Vladimir Putin.

As a way to emphasize the positive and to reach out to his citizens, Putin held his fourth live call-in show today. Not one, but two, national, government-controlled television stations showed three full hours of Putin live as he answered nearly 60 of the thousands of questions submitted by the public.

People could call in their suggested questions to a government switchboard, or send them electronically. The TV channels also set up microphones in 12 cities all over Russia and the former Soviet Union, where a few handpicked Russians got to ask their questions directly to the man in the Kremlin.

Putin's done this sort of thing three times before, most recently in December, 2003. It's a highly choreographed exercise aimed at keeping up Putin's image as a straight-talking "man of the people" and to highlight his achievements -- economic growth, fiscal conservatism, and political reforms giving Kremlin officials control over regional leaders. "All this taken together creates an absolutely stable situation in the country. People can plan their lives," Putin explained.

At times, it comes off like a giant ad for Russia. The microphones were placed in the most picturesque part of each town, making them look fit for a postcard. In many of the locations, people waved and cheered for the cameras when the networks crossed live to their city.

Putin said that questions were not censored. But the choice of what was asked -- and what was not brought up -- clearly shows the questions were vetted to make sure no one asked anything too hard or too critical.

These reports say that when Yevgeniya Khaidarova and her husband tried to get near the place where they could ask a question, plainclothes security agents found out they did not have the special passes which had been distributed by Vorkuta's mayor. The agents beat Khaidarov, causing him to lose two teeth, and pushed Khaidarova so hard she tore ligaments in her shoulder. Several other Vorkuta activists were also detained, according to the Grany.ru web site.

Elsewhere, the hand-picked crowds threw Putin softball after softball. These were, of course, things that do really matter to some Russians, like whether the coal industry will continue to get government support (it will), or whether a group of disputed islands will be handed over to Japan (they won't).

"Will you help get our college reopened?" asked one woman. "Do you want to raise the retirement age?" asked someone else. "Perhaps it would be sensible to hold a referendum on the subject of you serving a third term," suggested one caller. Putin also was asked about slot machines, bus passes, and translating his addresses into sign language.

Putin clearly enjoyed his chance to speak to the nation. He likes to talk, and his rare press conferences tend to last several hours; he relishes explaining his point of view in detail. He treated most of the questions with respect and even pride. "I'd like to congratulate your region for all the beautiful students you have," he told one pretty young woman in the Black Sea resort of Gelendzhik. But his answers were often non-committal, or low on detail.

A few brave Russians did ask tough questions. The most pressing ones came from a live microphone in the Chechen capital, Grozny -- where a decade of war has reduced the city to rubble, and where lawlessness reigns.

One Chechen woman told Putin that her son had disappeared four years ago without a trace. What is Putin doing to make sure people could live safely in Chechnya, she asked. Putin answered mostly with platitudes, although he did admit that either Chechen rebels or Russian forces could have been responsible for the disappearance of the questioner's son. "We will continue our work to find those missing, and those who are to blame for these crimes," he promised.

When the cameras went back to catch the woman's expression to Putin's answer, you could see her grimace.

Putin deserves credit, given the horrible situation in Chechnya, that he allowed a microphone there at all. There he did announce some real good news as well. Russia will increase its funding of anti-AIDS programs by 20 times, from less than $5 million to over $100 million, he said. This a major step forward in a country where an estimated 1 million people are infected with HIV and where few receive life-prolonging drug therapy. He promised to streamline procedures for ethnic Russians living outside Russia to return, and said that young draftees would not have to serve in Chechnya starting in 2007.

But today's program demonstrates quite clearly the Putin administration's fear of criticism and its dislike of real political discourse. This stage-managed display of happy talk shows that the time of "glasnost" in Russia is merely a distant memory.