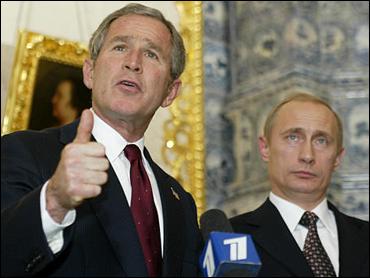 "We call on Iraq to comply fully and immediately with this and all relevant U.N. Security Council resolutions," the two leaders said in a joint statement after their private talks at the golden-domed Catherine's Palace.

That communiqué echoed a statement issued by NATO on Thursday that committed the alliance to pursuing a full accounting of Iraq's weapons programs.

However, Putin warned Mr. Bush that the United States should not wage war on its own and suggested more needs to be done first in the fight against terrorism.

"Diplomats have carried out very difficult and very complex work, and we do believe that we have to stay within the framework of the work being carried out by the United Nations," Putin said at a joint news conference with Mr. Bush.

The sharply worded question, though not a direct criticism of Bush, touched a nerve with the U.S. delegation and underscored the frustration felt by U.S. officials since the al-Qaida leader resurfaced after months of silence in an audiotape praising recent terrorist attacks.

"People who love freedom are one person safer as a result of us finding this guy," the president said. "We did bring to justice a killer."

But Putin, while issuing a statement in support of Bush's Iraq policy, followed quickly with severe doubts about the war on terrorism. It was not clear whether he was putting more weight on the fight against terrorists than the Iraq conflict, but that implication could be drawn.

"What can happen with armies, arms, weapons that exist in Pakistan, including weapons of mass destruction?" he said.

Putin said Russia agrees with United States that it is important to "make sure that Iraq has no weapons of mass destruction in its possession." But he added that "we do believe that we have to stay within the framework of the work being carried out within the United Nations."

Russia, one of the five permanent, veto-wielding members of the U.N. Security Council, initially resisted U.S. demands for a new U.N. resolution on Iraq this fall.

Along with China and France, which also hold veto power, Russia's resistance forced the United States to compromise on the wording of the resolution. Russia eventually supported the new Security Council measure, as did all 14 other members of the Council.

Russia's reticence was no surprise. For years, Moscow has supported easing the sanctions imposed on Iraq after the gulf war, questioning their effectiveness.

In addition, Russia had been reluctant to take on Iraqi President Saddam Hussein because his government owes $8 billion for equipment the Soviets sold Iraq during the 1980s and its war with Iran. Mr. Bush assured the Russians on Thursday that "of course those interests will be honored" in any post-disarmament or postwar situation.

It was Mr. Bush's phone call to Putin this month, when the United States was seeking votes from the Security Council, that led to the scheduling of Friday's trip.

In that conversation, White House officials said, Putin told Mr. Bush he should come to Russia after the NATO summit, leaving unspoken -- but clear to Bush -- the message that the Russian people wanted reassurance that an expanded NATO means no harm to Russia.

The president's brief swing through Russia was thus a diplomatic hand-holding mission of sorts, to offer Putin assurances that he has nothing to fear from a larger NATO, CBS News Correspondent Mark Knoller reports.

"NATO expansion is in Russia's best interest," he said, arguing that Russia doesn't need a buffer zone of protection from NATO. In its summit declaration, the NATO leaders committed themselves to broadening cooperation with Russia as "equal partners."

Even as Russia expressed anxiety, NATO worked this week to shift its focus from its historic task of containing the Soviet Union to the new fight against terrorism.

The NATO commitment on Iraq was at best a partial victory for Mr. Bush. In its four-paragraph statement, the 19-member alliance unanimously echoed the U.N. call for "severe consequences" should Iraq insist on retaining weapons of mass destruction.

But the statement did not threaten collective military action by the 19-nation alliance, nor did it prevent some allies -- particularly Germany and France -- from distancing themselves from Mr. Bush's zero tolerance position and even the document itself.