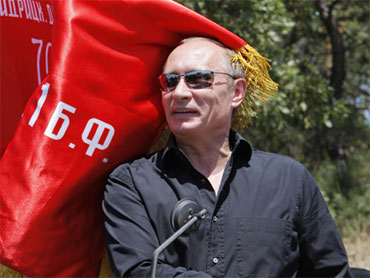 Vladimir Putin says he sang a patriotic song with the Russian spies who were expelled from the United States and promised them a "bright" future.

Russia's prime minister said he recently met with the 10 sleeper agents, without saying when or where.

He said they "talked about life" and sang "What Motherland Begins With," a Soviet song favored by intelligence officers.

Putin, a former KGB colonel, told reporters in the Ukraine on Saturday night the spies had a "very difficult fate" and were uncovered by a betrayal.

But he says the spies will have a "bright, interesting life" in Russia and will work in "decent" places.

The agents were deported in the biggest spy swap since the Cold War.

Earlier Saturday, Putin attended the 14th International Bike Show near the Crimean port of Sevastopol before visiting Yanukovych at Foros.

Putin, in Ukraine for talks with the country's new Russia-friendly leadership, had his black shirt sleeves rolled up as he motored towards the stage along a dusty road on the motorized trike.

He clearly reveled in the moment, smiling and waving to the enthusiastic crowd, many of whom were also dressed in black.

About 5,000 bikers from around Europe and beyond were gathered in Sevastopol for the festival on the Crimea peninsula in southern Ukraine.

He described the motorbike as the most democratic form of transport and praised the bikers' free spirit.
Taking to an improvised stage, he urged the bikers to unite in promoting safe driving.

"I want to ask you and wish you something. Take care of yourselves and the ones around you. Let's say 'No' to crazy racing and careless driving. Long live Ukraine! Long live Russia! Long live bikes!" he said.