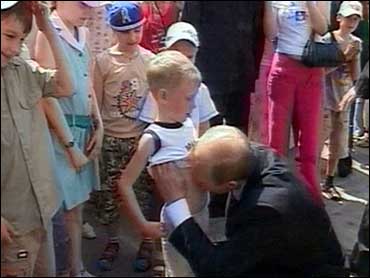 In between answering questions about North Korea's missiles, Iran's nuclear program and relations with the United States, Russian President Vladimir Putin answered what was for many observers a more burning question: What compelled him to kiss the bare stomach of a young boy in a Kremlin courtyard?

Footage of the June 28 incident was broadcast on all Russian television stations, quickly became fodder for Internet chat rooms and topped the Moscow tabloids the day after. The question was one of the most popular among the thousands e-mailed in for the Web chat, hosted by the British Broadcasting Corp. and Russian search engine Yandex.ru.

In the footage, Putin, 53, is shown walking up to a small crowd of tourists in a Kremlin courtyard and crouching down in front of the boy, who appears to be five or six years old. As the Russian president talks with Nikita for several seconds, he tugs at the boy's shirt before finally lifting it up and kissing him on his bare stomach.

"He seemed to me very independent, very serious, but at the same time a boy is always vulnerable. He was very sweet. I'll be honest: I felt an urge to squeeze him like a kitten, and that led to the gesture that I made. There was nothing behind it really," Putin said, smiling.