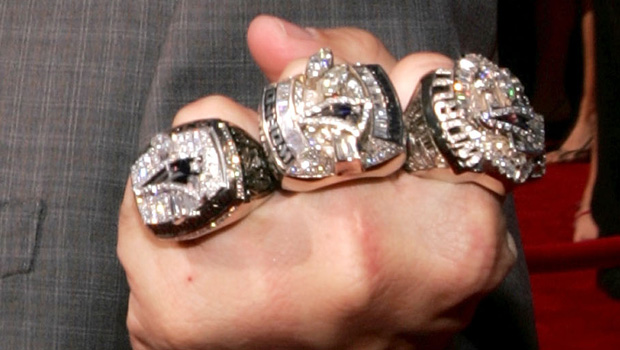 A glittering, $25,000 Super Bowl ring is sitting in the Kremlin's library, but does it belong there?

Patriots owner Robert Kraft and Russian President Valdimir Putin are in an awkward argument about eight years after Kraft met up with the Russian president while visiting St. Petersburg. Kraft said he showed him his XXXIX victory ring -- and that's when the stories diverge.

"I took out the ring and showed it to [Putin], and he put it on and he goes, 'I can kill someone with this ring,'" Kraft said at a New York City gala Thursday, according the New York Post. "I put my hand out and he put it in his pocket, and three KGB guys got around him and walked out."

Putin 's office denied such an event occurred, insisting the Super Bowl ring was a gift from the Patriots owner.

"Back in 2005 I stood behind the president's back and I saw how that ring was presented to him. All that talk about some kind of pressure that was exerted on him (Kraft) should be the subject of a detailed talk with psychoanalysts, I think," Peskov told The Associated Press.

"At the same time, I am aware that this gentleman (Kraft) is feeling such a horrible pain about the 2005 loss," Peskov said. "The president will be ready to send him another ring as a gift, which he (Putin) can buy with his own money."

Kraft released a statement in 2005 saying the ring was indeed a present, but now he claims he only did so at the request of the White House to avoid an uncomfortable situation.

Stacey James, a spokesperson for the Kraft Group, the holding company for Kraft's business ventures, including the Patriots, said Sunday that the Post article shouldn't be taken too seriously.

"It's a humorous, anecdotal story that Robert retells for laughs," James said in a statement. "He loves that his ring is at the Kremlin, and, as he stated back in 2005, he continues to have great respect for Russia and the leadership of President Putin. In particular, he credits President Putin for modernizing the Russian economy."

The statement added that "an added benefit from the attention this story gathered eight years ago was the creation of some Patriots fan clubs in Russia."