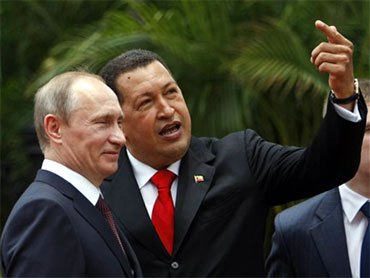 Russia has offered to help Venezuela set up its own space industry, including a satellite launch site, as Prime Minister Vladimir Putin made his first visit to the South American country on Friday.

Venezuelan President Hugo Chavez announced the offer by Russia hours before Putin arrived, saying officials would discuss the possibility of setting up a "satellite launcher and a factory."

"Russia offers help so that Venezuela can have its own industry for the use of its outer space," Chavez said Thursday night. He didn't give details or say how much that might cost.

Chavez's government has already bought more than $4 billion in Russian weapons since 2005, including helicopters, fighter jets and 100,000 Kalashnikov rifles. Chavez said last year that Russia agreed to loan Venezuela up to $2.2 billion for additional arms deals.

Russian and Venezuelan officials said they planned to sign new agreements for energy projects in Venezuela, as well as industrial, commercial and agriculture projects.

Chavez also reiterated that Russia will help Venezuela develop nuclear energy - a plan he has mentioned previously that has yet to take shape.

"We aren't going to make an atomic bomb, but we are going to develop atomic energy with peaceful aims," he said. Chavez, whose country is a major oil exporter and OPEC member, says "we have to prepare ourselves for the post-oil era."

Venezuela also intends to buy two Beriev Be-200 amphibious planes, which are used for dousing blazes, Chavez said. Fires in El Avila national park in the mountains above Caracas have at times blanketed the city with a smoky haze in recent days.

Chavez has grown increasingly close to Russia, Iran and China while fiercely criticizing U.S. policies, and his calls for countering U.S. influence to create a "multi-polar world" have found resonance in Moscow.

The U.S. State Department poked fun at Chavez's suggestion that Venezuela may set up a space industry with Russian help.

"We would note that the government of Venezuela was largely closed this week due to energy shortages," spokesman P.J. Crowley told reporters. "To the extent that Venezuela is going to expend resources on behalf of its people, perhaps the focus should be more terrestrial than extraterrestrial."

Worsening electricity shortages prompted Chavez's government to decree public holidays throughout this week to save energy. A severe drought has pushed water levels to precarious lows in the dam that supplies most of Venezuela's electricity.

Political analysts in Moscow say Russia is drawn to Venezuela because of the its anti-U.S. rhetoric, though business deals have helped cement the growing relationship.

"The only thing that really unites Russia and Venezuela is that they don't want to see a unipolar world," dominated by the U.S., said Sergei Mikheyev, an analyst at the Center for Political Technologies, adding that President Obama's administration hasn't done enough to lure Moscow away from Caracas.

Mr. Obama says he is committed to a "reset" of the U.S. relationship with Russia, but Mikheyev said "the Americans haven't compromised with Russia on any significant issue ... so it makes no sense for them (the Russians) to change priorities."

Mikheyev noted that the United States has so far failed to react to Russia's plea to cut drug traffic from Afghanistan to Russia's Central Asian borders. Russia has also spent years trying to convince the U.S. to scrap Cold War measures that have restricted U.S.-Russia trade.

Venezuela is also a very lucrative arms and technology market, and Mikheyev said "without the business involved, the anti-American rhetoric wouldn't be enough to unite Russia and Venezuela".

Venezuela and Russia announced a joint venture earlier this week to drill for and process heavy crude oil in eastern Venezuela, saying they expect to start producing 50,000 barrels a day this year and to build an upgrader facility to eventually process about 450,000 barrels a day - giving a significant boost to Venezuela's oil output.

As part of Putin's visit, he and Chavez toured the Russian tall ship Kruzenshtern, which is docked in Venezuela on a visit.

Chavez chatted with Russian sailors through an interpreter and presented a copy of a sword used by South American independence hero Simon Bolivar, telling Putin he would show him the real sword used by Bolivar - the namesake of Chavez's socialist-inspired "Bolivarian Revolution." Putin also visited Bolivar's tomb in Caracas before holding talks in private at the presidential palace.