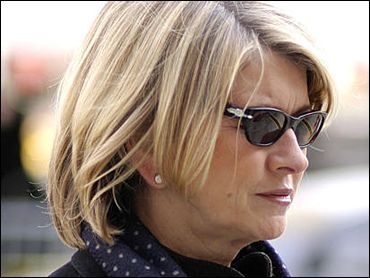 With prosecutors expected to rest their case this week, defense lawyers for Martha Stewart face what may be their biggest decision: whether to put their client on the stand.

The judge in the case dealt a blow Friday to the government's effort to prove that Stewart committed securities fraud when she publicly proclaimed her innocence.

The securities fraud count — the most serious count against Stewart — accuses her of propping up the stock price of her own company, Martha Stewart Living Omnimedia, by claiming in 2002 that her sale of ImClone Systems stock was proper and that she was cooperating with authorities.

Securities fraud carries a potential 10-year prison sentence. Each of the four other charges against Stewart carries five years. If convicted on any count, she would probably get much less than the maximum.

In her ruling, Cedarbaum granted a request by Stewart to block expert testimony on the "materiality" of Stewart's statements in 2002.

Prosecutors will be barred from introducing stock research reports and from calling stock analysts to testify to the effect Stewart's statements had on the stock price, according to the Stewart defense.

The ruling, issued with the jury out of the room, blocks testimony on "whether a reasonable investor would have considered the statements important in making an investment decision," the judge said.

The decision could still allow prosecutors to introduce stock charts to show Stewart's company's stock rose after her statements. But it would be left to the jury to decide whether the statements led to the gains.

"I think it's potentially very significant," Stewart spokesman George Sard said. Asked whether Stewart was pleased, he said: "I haven't talked to her, but I think that's a fair inference."

Stewart is accused of lying to investigators about why she dumped 3,928 shares of ImClone on Dec. 27, 2001 — just before the stock plunged on negative news about its experimental cancer drug. The negative news was that the Food and Drug Administration had rejected an application for the drug Erbitux.

Stewart claims she and her broker, Peter Bacanovic, had a standing agreement to sell when the stock fell below $60. But the government says Bacanovic, through an aide, alerted Stewart that ImClone founder Sam Waksal was dumping his shares.

In front of jurors Friday, Stewart's defense tried to call into question the accuracy of notes taken by an FBI agent at Stewart's two interviews with investigators, in February and April 2002.

Agent Catherine Farmer's notes are the only record of the interviews, and form the basis for the government's accusations that Stewart lied.

Farmer took notes on the two meetings, then typed routine summaries of them, called FBI 302 reports, based on her notes and memory.

In Stewart's interview on Feb. 4, 2002, Farmer's 302 report shows Stewart claimed she did not know whether there was a record at her office of a call from Bacanovic on the day she sold her ImClone stock.

But under questioning from Stewart lawyer John Tigue, Farmer conceded the information in the 302 report — written immediately after the interview — came from her memory only and did not appear in her notes.

"It's possible to miss important things, and you were brand new to the case, weren't you?" Tigue asked.

"Was Martha Stewart treated any differently than anyone else who submits to a voluntary interview?" Seymour asked Farmer.

"No," the agent replied.

In an ironic twist, the FDA finally approved the drug Thursday, and ImClone stock was sharply higher Friday.