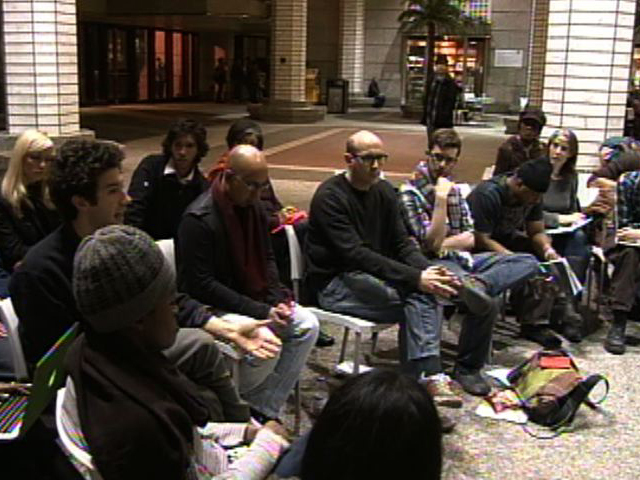 The Occupy Wall Street movement has been pushed off the streets in city after city in recent weeks, raising the question of where it goes next. CBS News correspondent Cynthia Bowers has gone in search of the answer.

By week's end, this was all that was left of the Occupy LA encampment: a spirited tent city now a pile of debris. The occupation may be broken, but the movement has not bowed.

"An idea cannot be evicted and a movement cannot be imprisoned," said Occupy LA organizer, Mario Brito at a press conference. He said their movement will regroup and refocus on foreclosures .

"Banks, if you don't heed our call, expect to see our tents in your lobbies," he said.

Just two and a half weeks after they were kicked out of their encampment in New York's Zuccotti Park, protesters still gather daily. On Saturday, they are celebrating the movement's resilience.

Occupy Wall Street has left the street and gone legit. They've rented office space in the Financial District and meet daily at a public atrium inside Deutsche Bank.

"We've managed to, in basically two months, propel the issues of inequality and social justice to the top of our national discussion," said one Occupier.

In various cities today there were marches on a variety of issues, but the movement plans new tactics. On Tuesday around the nation, it plans to occupy foreclosed homes. In mid-January, a call to pitch tents outside of Congress.

"I want them to say it inside the Capitol," said Berkeley political science graduate student Josh Green. He also said the next step is to turn the protest movement into a political movement. With his website, Occupy the Congress, Green is hoping to recruit candidates to run for office.

"Until you get an Occupy candidate," he said, "someone who identifies with the movement out there, you're not really gonna get those issues talked about."

Holding onto encampments like the one here proved here proved too difficult for the Occupy movement. Effective political organization could too, especially for a movement that prides itself on being decentralized.