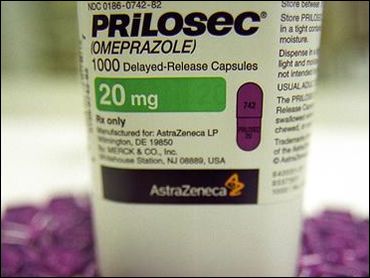 The Food and Drug Administration approved a nonprescription version of Prilosec, one of the world's top-selling drugs, late Friday.

This over-the-counter version is no longer purple, but salmon pink. And Prilosec OTC will cost less than $1 a day, less than a third the price of today's prescription pill, said distributor Procter & Gamble.

Unlike the two other types of nonprescription heartburn remedies, Prilosec OTC is the only one approved to treat frequent heartburn - the kind that occurs two or more days a week. Other nonprescription remedies - antacids and the acid reducers Pepcid, Zantac and Tagamet - are to treat occasional heartburn or to prevent meal-induced heartburn.

The move is partly a bid to prop up Prilosec sales after a generic prescription version began selling several months ago for a little less than the cost of prescription Prilosec. Because Procter & Gamble had to conduct extensive new research to persuade FDA to make the nonprescription switch, it is eligible for three years of marketing exclusivity before its generic competitor can be sold without a prescription.

Adding to the confusion is prescription-only Nexium, a slightly different version that's billed as "next-generation Prilosec" and advertises as "today's purple pill." AstraZeneca LP makes both Nexium and Prilosec, but P&G will market Prilosec OTC.

Prilosec is not a simple acid-removing remedy to be taken after downing too much spicy food - and the FDA delayed nonprescription approval for almost a year to be certain that boxes will fully explain that to consumers so they can use it properly.

There are tens of millions of heartburn sufferers, and they spend about $1.2 billion a year on antacids and acid-reducing over-the-counter remedies.

Prilosec OTC is for the more serious heartburn patients - but those not quite serious enough to be under a doctor's care.

Called a "proton pump inhibitor," Prilosec OTC takes a few days to build up and start blocking acid secretions by turning off some of the mini-pumps in the stomach that produce it.

So Prilosec OTC will come in 14-pill packages. People who recently started suffering frequent heartburn should try one 14-day course of treatment. If the heartburn returns in less than four months, the patient should see a doctor, the FDA said. If it comes back after that, the patient can try Prilosec OTC again - but should take no more than three 14-day courses a year.

The reason: Frequent heartburn is usually caused by "gastroesophageal reflux disease," or GERD, where a loose valve allows stomach acid to back up into the delicate esophagus. If GERD is severe, patients need a doctor's care - not just self-care with a nonprescription drug, the FDA stressed. That's because severe GERD can badly scar the esophagus and even put patients at risk of esophageal cancer.

Doctors typically prescribe Prilosec for longer periods of time than 14 days, but are supervising the patients to watch for worsening problems.