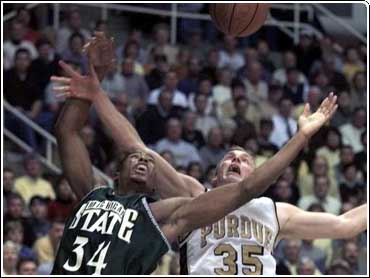 Purdue's seniors have grown hungry as their college careers wind down.

On Tuesday night, they showed they aren't ready to go away quietly.

Seniors Brian Cardinal, Mike Robinson and Jaraan Cornell rallied the Boilermakers from a 10-point deficit in the second half to beat No. 6 Michigan State 70-67.

Cardinal led the way with 17 points and Robinson added 16, while Cornell had 10 of his 12 in the second half.

The seniors recalled last year's visit by Michigan State when the Spartans broke a 30-30 tie and went on to a 60-46 victory.

"We were very hungry, hungrier than we were last year," Robinson said. "We took a lot of their plays away and made them run motion.

"We missed a layup and dunk during that stretch that allowed them to get back in it," Michigan State coach Tom Izzo said. "I really thought that we lost the game in the first two minutes. I challenged our team after that."

Cardinal ignited the 10-point run with a 3-pointer and two free throws. Cornell hit a 3-pointer that gave Purdue a 62-61 lead with 3:54 remaining.

Robinson's layup with 2:54 remaining put the Boilermakers ahead to stay at 64-63

Michigan State, which fell out of a tie for first place in the conference with Ohio State, then had three consecutive turnovers in 76 seconds and the Boilermakers went up 66-63 following the third when Cardinal snared an offensive rebound and laid it in with 1:19 left.

Th Spartans fouled Robinson with 40 seconds left and he gave the Boilermakers a 68-63 lead with two free throws.

Andre Hutson put in an uncontested layup with 28 seconds to go for Michigan State and the Boilermakers held off the Spartans as Robinson and Carson Cunningham each made one of two free throws.

"When they got down 10, I asked them in the huddle if they really thought they could win. They said yes without hesitating, so I believed them and their eyes said that," Purdue coach Gene Keady said. "I was hoping that if we got them into a close game, because they hadn't had one in several games, that it might help us.

A.J. Granger of the Spartans matched his career high with 17 points and also had a career-high 12 rebounds. Cleaves was the only other Spartan in double figures, reaching it when he made a lay-up in the final seconds to finish with 11. He also had nine assists.

The Spartans consistently outmuscled the Boilermakers, especially at their end of the court. Michigan State lost despite outrebounding Purdue 42-24 and had a 19-10 advantage on the offensive end.

"They hit the boards so hard, it is ridiculous. Referees can't call fouls because they have four guys crashing the board all the time," Robinson said. "That's a great team. We played one of our best games."

Michigan State shot 57 percent in the first half (16-of-28), but only 33 percent (11-of-33) in the second half when it had nine of its 18 turnovers. The Boilermakers had only nine for the game, five in the second half.