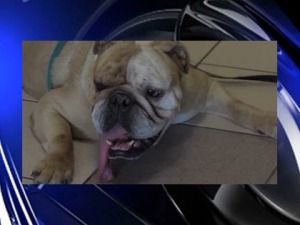 (CBS) MILWAUKEE - On New Year's Day in 2008, Isa Mendoza of Miami left her English bulldog, Luna, alone in her fenced-in yard for just a minute. When she came back outside, her puppy was gone.  Stolen.

Now, more than four years later, Luna has been found...wandering as a stray...in Milwaukee.

All thanks to an embedded microchip,  CBS Miami reports.

The bulldog, now five, was picked up by animal control in Wisconsin which learned a lot about her because of the microchip - and now, a dog and owner reunion is being planned.

Mendoza says she is thrilled.

"To know she's alive and is on her way over to me is heartwarming," Mendoza told CBS affiliate WTMJ.  Luna is expected to be transported to Miami on Sunday.

In the meantime, Chrystal Reese and her husband, David, of West Allis are acting as Luna's foster parents.

Where Luna has been for the past four years or what happened to her is still a mystery.

"It's baffling how she ended up in Wisconsin from Florida," Reese told WTMJ.

Luna has a Caesarian scar, so she clearly has had puppies. "Unfortunately, she probably was bred at one point or another," Jessica Huber of the Milwaukee Area Domestic Animal Control Commission said.

Luna cost Mendoza $850 at a pet shop so chances are Luna was a money maker if she was, in fact, used for breeding.