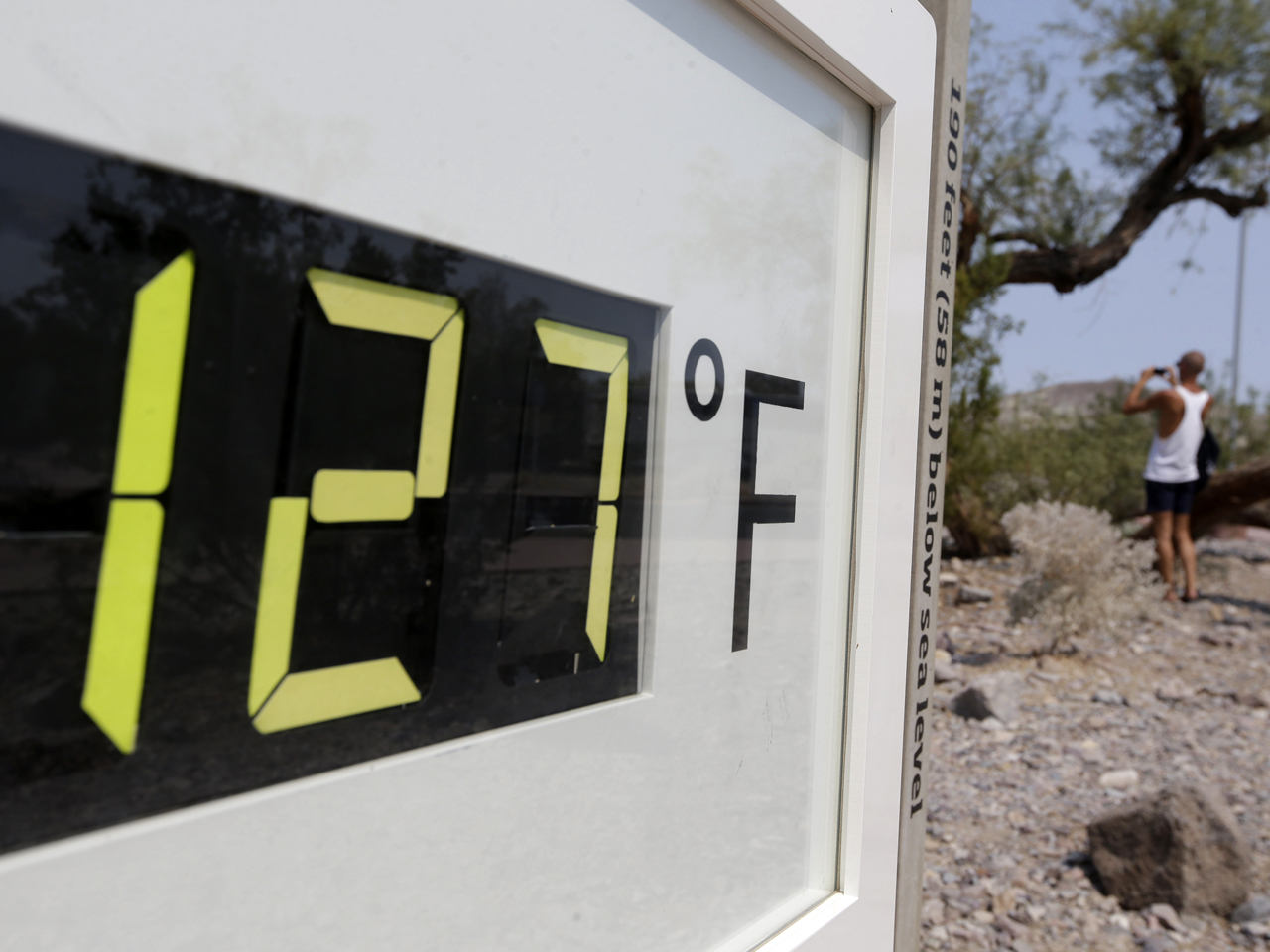 DEATH VALLEY, Calif. Scorching heat blistered the Southwest on Saturday, where highs between 115 and 120 degrees were expected for parts of Arizona, Nevada and California through the weekend.

Forecasters said temperatures in sunbaked Las Vegas could match the record of 117 degrees Saturday; as of late afternoon, it was 115 degrees. Phoenix hit 119 degrees by mid-afternoon, breaking the record for June 29 that was set in 1994. And large swaths of California sweltered under extreme heat warnings, which are expected to last into Tuesday night — and maybe even longer.

Dan Kail was vacationing in Las Vegas when he heard that the temperature at California's Death Valley could approach 130 degrees this weekend. He didn't hesitate to make a trip to the desert location that is typically the hottest place on the planet.

"Coming to Death Valley in the summertime has always been on the top of my bucket list," the 67-year-old Pittsburgh man said. "When I found out it might set a record I rented a car and drove straight over. If it goes above 130 I will have something to brag about."

The forecast called for Death Valley to reach 128 degrees Saturday as part of a heat wave that has caused large parts of the western U.S. to suffer. At 4 p.m. PDT, the temperature was 122 degrees. Death Valley's record high of 134 degrees, set a century ago, stands as the highest temperature ever recorded on Earth.

Meteorologist Jeff Berardelli of CBS Station WFOR Miami reported Saturday evening that we are going to see a prolonged heat wave continue for the next several days in the desert southwest. Sunday could see high temperatures near 130 degrees in Death Valley and these temperatures are going to be very slow to cool down over the next several days -- that heat wave is going to stick around.

A couple hours south in Baker, the temperature was expected to peak at 120 degrees in the road tripper's oasis in the Mojave Desert on Interstate 15. The strip of gas stations and restaurants between Los Angeles and Las Vegas is known by travelers for the giant thermometer that often notes temperatures in the triple digits.

At the Mad Greek restaurant there, a waitress called out orders for "Chocolate shake! Strawberry shake!" while the temperature hovered at 112 degrees during the lunch rush.

Burbank set a record overnight low with temperatures dipping to 74 degrees overnight, much warmer than the previous record of 68 degrees for Saturday's early hours.

Farther north, triple-digit temps were reached in downtown Sacramento on Saturday, according to the weather service.

Authorities say a man died and another was hospitalized in serious condition Saturday afternoon in Las Vegas.

Las Vegas fire and rescue spokesman Tim Szymanski says paramedics responded to a home with no air conditioning and found an elderly man dead. He says while the man had medical issues, paramedics thought his condition was aggravated by the heat.

Paramedics say another elderly man was on a long trip in his car when the air conditioning went out. Paramedics say he taken to the hospital in serious condition with heat stroke after he stopped in Las Vegas.

Health officials warned people to be extremely careful when venturing outdoors. The risks include not only dehydration and heat stroke but burns from the concrete and asphalt. Dogs can suffer burns and blisters on their paws by walking on hot pavement.

Cooling stations were set up to shelter the homeless and elderly people who can't afford to run their air conditioners. In Phoenix, Joe Arpaio, the famously hard-nosed sheriff who runs a tent jail, planned to distribute ice cream and cold towels to inmates this weekend.

Officials said personnel were added to the Border Patrol's search-and-rescue unit because of the danger to people trying to slip across the Mexican border. At least seven people have been found dead in the last week in Arizona after falling victim to the brutal desert heat.

Temperatures are also expected to soar across Utah and into Wyoming and Idaho, with triple-digit heat forecast for the Boise area. Cities in Washington state that are better known for cool, rainy weather should break the 90s next week.

The heat was so punishing that rangers took up positions at trailheads at Lake Mead in Nevada to persuade people not to hike. Zookeepers in Phoenix hosed down the elephants and fed tigers frozen fish snacks. Dogs were at risk of burning their paws on scorched pavement, and airlines kept close watch on the heat for fear that it could cause flights to be delayed.