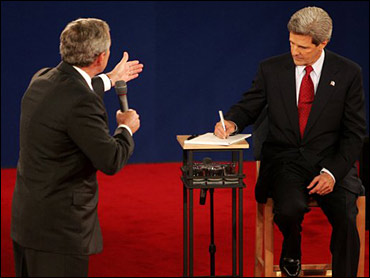 
Fierce from the outset, Sen. John Kerry and President Bush pulled few punches in their second debate Friday night in St. Louis. Experts interviewed immediately following the head-to-head contest spoke to the style, the nuance of character and the unspoken gestures that often sway voters.

Though Mr. Bush was more composed than in last week's first presidential debate, all agreed his tone was sometimes antagonistic and he again appeared uncomfortable being challenged. Kerry, on the other hand, was viewed as measured and articulate. However, none of the experts touted a clear winner.

"Bush was aggressive now and then," said James Thurber, director of the Center for Congressional and Presidential Studies at American University. "Bush made some mistakes in speaking. Kerry didn't make any gaffes in terms of speaking and style. The questions are theoretically to swing voters and I didn't see anything there that is going to swing voters."

While experts saw a night of substance and not-so-subtle hostility, none believed undecided voters will be swayed by this debate.

But what is clear after two Bush-Kerry debates is that the candidates don't care for each other. They may shake hands, but resentment runs deep. Kerry infers Mr. Bush is simplistic to the point of dishonesty; Mr. Bush infers Kerry is complicated to the point of ineffectiveness.

"Kerry was very aggressive in this debate. In some of those two-shots it looked like Kerry was the prosecutor and Bush was the defendant," said Alan Schroeder, a presidential debate historian at Northeastern University. "Bush was better than last time but he seemed rather shrill to me and not terribly articulate."

Mr. Bush was funnier; Kerry was more substantive. While the president didn't scowl as in the first presidential debate, he did sit lock-jawed, at one time jumping up from his chair, aching to rebut Kerry.

"Bush's jaw was set. He was chomping his mouth," Schroeder said.

But as on the stump, Mr. Bush's self-deprecating humor may have balanced his agitated expressions. And this time, the close-ups were fewer while the other candidate spoke.

When Kerry said he would "get tough" with Iran if necessary, Mr. Bush was quick to rebut.

"That answer almost made me want to scowl," the president quipped. The audience chuckled.

In the first debate, President Bush' scowls were thought to play a large part in viewers' belief that Kerry won, based on polls by CBS News and others.

Tonight, before an audience of 140 likely voters at Washington University in St. Louis, moderator Charles Gibson of ABC directed the undecided voters from question to question. The candidates could walk around, though within a prescribed space. They were not allowed to come within reach of the audience.

"The great opportunity that this format gives is movement. A lot of speakers, like to move when talking, preachers, and Bush likes this," said film historian David Thomson, who emphasizes thematic components to debates. "Bush gave off a signal right away that this is a format he was more comfortable. But I think Kerry handled it equally well."

Thomson thought the debate was "much more even" than the first one. Like Thurber, Thompson said, "I suspect that this is not a debate in which there will be a substantial change one way or another."

Wednesday in Arizona, the final presidential debate will emphasize domestic issues. But it remains unclear whether any further debating will sway more voters. By the close of the 90-minute face-off Friday, those interviewed agreed that the candidates said much that played to their political bases, but little that would influence the undecided.

"I think by the end of this debate there was a feeling that we've heard these guys say the same things too many times," Thomson said. "We now know. It's up to us. If we can't make up our minds on what we see, then the worse for us.