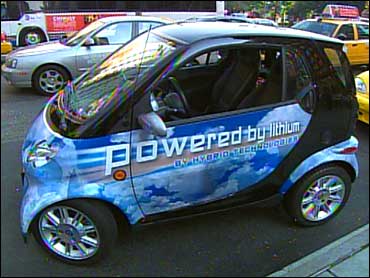 If you're fed up with paying high gas prices, Hybrid Technologies says it has a solution for you.

The company is out with an "electric smart car" that runs on a lithium battery.

The company's co-founder, Richard Griffiths, pointed out to The Early Show co-anchor Rene Syler Tuesday that that's the same type of battery you'll find in cell phones, PDAs, computers, "pretty much anything we use now that's a portable electronic device."

Griffiths showed Syler how you simply plug the car in, literally, to a conventional 110 volt outlet.

"If you completely drain the battery," Griffiths said to Syler, "it's like your cell phone, if you drain the battery, a full charge is five to six hours. Normally, people won't drain the entire battery, so maybe one to two hours at night. Basically, it's like, 'Honey, did you take out the garbage and plug in the car?' It's kind of a new way of thinking. It's a plug-in hybrid. It uses absolutely no gas.

"It's very, very small, though," Syler observed. "I am thinking safety. How does it crash test?"

"It has a three-star crash test rating," Griffiths responded, "and it has air bag systems, five air bags, three in the front. It's like a walnut. It's actually a very safe car. This is a city commuter car, so it's not a car that you'll necessarily be driving on the highway every day. So we're not looking at high speeds, necessarily."

He admitted the car's $35,000 pricetag is one of its "big downfalls" but added, "We're looking at early adapters. I rushed out and bought a DVD when it was $1,200. Or the VCR in 1985, when it was $1,200. Prices will come down; prices will start to hit an affordable level. We're also looking at federal tax rebates. At $65 (Syler said she just spent) to fill up your tank, after a few years, I am starting to think it might make a lot of sense."

Then, it was off into Manhattan traffic, as Griffiths offered Syler a test drive.