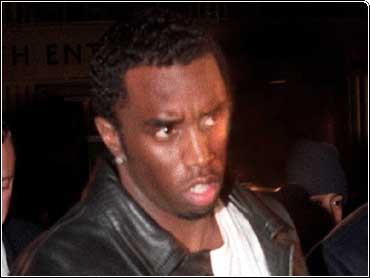 A weary Sean "Puffy" Combs proclaimed his innocence after spending a long day behind bars in connection with a shooting at a Times Square dance club.

"I do not own a gun," Combs told reporters after being arraigned on weapons charges late Monday. "I do not carry a gun. The charges and allegations against me are 100 percent false."

Three people were wounded in the shooting early Monday at Club NY. A lesser-known 19-year-old rapper called Shyne, whose real name is Jamal Barrow, was charged with three counts of attempted murder.

Combs and girlfriend Jennifer Lopez, the singer and actress known for movies including Selena and Out of Sight, were arrested when officers stopped a car pulling away from the shooting scene and found the couple and a stolen 9 mm pistol inside.

Police Commissioner Howard Safir initially said that both Combs and Lopez were being charged. But the Manhattan district attorney's office said Lopez would not be prosecuted, and she was freed about 4 p.m.

"We decided to release Ms. Lopez based on the evaluation of the evidence," said spokesman Wayne Brison.

Lopez's attorney, Lawrence Ruggiero, said his client cooperated with authorities during more than 10 hours of questioning.

"They established she did nothing wrong," he said. "Jennifer had nothing to do with the gun or the shooting."

According to the New York Daily News, Lopez "sobbed uncontrollably" during the 14 hours she spent in police custody, at times handcuffed to a bench in a precinct station. She was also locked alone in a cell and fingerprinted.

"She was crying all over the place, in the squadroom," a police source told the paper. "She was just upset about the whole thing."

The sport utility vehicle was stopped because the couple had left the scene of a crime, said Detective John Giammarino, a police department spokesman. The car ran at least one red light before it was pulled over about 10 blocks from the club, he said.

A gun was found in full view on the front right seat; Combs and Lopez were in the back seat. Also in the vehicle were a driver and a bodyguard.

Assistant District Attorney Matthew Bogdanos said the gun had been reported stolen from the small town Powder Springs, Ga., in August. The gun was not the one used in the club shooting, police said.

The driver, Wardel Fenderson, 41, and bodyguard, Anthony Jones, 34, were arraigned on charges of criminal possession of a gun. Jones also was charged with marijuana possession. Fenderson was released on $10,000 bail and Jones on $20,000 bail.

"Mr. Combs never had a gun or anything to do with a gun," said Combs' lawyer, Harvey Slovis.

Combs' spokesman, Dan Klores, insistd his client was a "victim of circumstance....Sean Combs and Jennifer Lopez unwittingly got into a car to escape a life-threatening situation."

But the assistant district attorney said that a witness reported that both Barrow and Combs pulled out guns after someone threw a stack of money during a dispute inside the club. The witness said Barrow fired several times.

The Daily News reported the money-tosser was Combs, who got into an argument just before 3 a.m. with someone who didn't like the way he was showing off his wealth.

The paper reported that various sources identified that gunman as Barrow.

Combs kept his head down and said nothing during his arraignment in Manhattan Criminal Court. He was charged with second- and third-degree weapons possession.

Fenderson and Jones were charged with third-degree weapons possession.

The second-degree charge implies intent to use the weapon and alludes to the witness who said she saw Combs draw the gun inside the club, said Barbara Thompson, a spokeswoman for District Attorney Robert Morgenthau.

Barrow was found outside the club with another 9 mm gun. He was charged with attempted murder and was awaiting arraignment early this morning.

Combs was arrested in April for allegedly beating record executive Steven Stoute, who suffered a broken arm, a broken jaw and cuts to his head. Stoute said Combs was one of three assailants. Originally charged with assault, Combs pleaded guilty to a lesser charge, harassment, and was ordered to undergo counseling.

Last January, Combs and rapper Dwight Myers, known as Heavy D, were found 50 percent liable for the deaths of nine students who were crushed in a stampede at a City College party they sponsored Dec. 28, 1991. A state Court of Claims judge assigned the rest of the blame to the college. There were no criminal charges, and all of the civil claims have been settled.

Combs has produced songs for Mariah Carey and Madonna. Lopez also starred in Money Train and Anaconda and released her debut album, On the 6, in June.

Friends tell The Daily News this incident could be the end of their romance, which was already in trouble. Her family, in the New York City borough of The Bronx, is reportedly shaken by her detention.