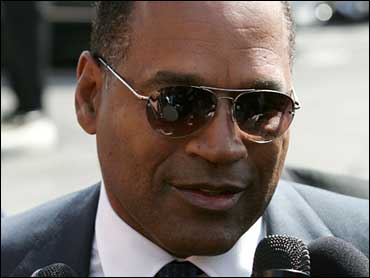 In an account his publisher considers a confession and some media executives call revolting, O.J. Simpson plans a book and TV interview to discuss how, hypothetically, he could have killed his ex-wife and her friend.

Two weeks before the book, "If I Did It," goes on sale, scorn was already being heaped Wednesday on Simpson, the publisher and Fox, which plans to air the Simpson interview in two parts Nov. 27 and 29.

In recent years, Simpson has made a living signing autographs at trade shows. But according to the National Enquirer, he's being paid $3.5 million for his story, reports CBS News correspondent Hattie Kaufman.

Denise Brown, sister of Simpson's slain ex-wife, Nicole Brown Simpson, lashed out at the publisher for "promoting the wrongdoing of criminals" and commercializing abuse.

Judith Regan, whose ReganBooks imprint is publishing the book, refused to say what Simpson is being paid for the book but said he came to her with the idea.

"This is an historic case, and I consider this his confession," Regan told The Associated Press.

The former football star was acquitted in 1995 of murdering his ex-wife and her friend Ron Goldman after a trial that became an instant cultural flashpoint.

He was later found liable for the deaths in a wrongful-death suit filed by the Goldman family. In the years since, he has been mocked relentlessly by late-night comedians, particularly for his vow to hunt down the true killers.

Simpson has failed to pay the $33.5 million judgment against him in the civil case. His NFL pension and his Florida home cannot legally be seized. He and the families of the victims have wrangled over the money in court for years.

Simpson did not return numerous calls for comment. Simpson attorney Yale Galanter said he did not know about the book or the interview until this week.

"The book was not done through our office," Galanter said. "I did not have anything to do with the negotiations of the book. This was strictly done between OJ and others."

He said there is "only one chapter that deals with their deaths and that chapter, in my understanding, has a disclaimer that it's complete fiction."

Meanwhile, other publishers and publishing industry observers practically fell over each other to criticize ReganBooks, an imprint of HarperCollins Publishers, and Simpson himself.

"This is not about being heard. This is about trying to cash in, in a pathetic way, on some notoriety," said Sara Nelson, editor in chief of Publishers Weekly. "That a person keeps wanting to bring this up seems almost nutty to me."

Patricia Schroeder, president and chief executive of the American Association of Publishers, described the developments as sickening.

"But I think it's going to stir an awful lot of debate and make the culture take a real look at itself, and that may not be unhealthy," she said.

Indeed, one thing that seemed certain was that the book and interview — which Fox will air at the end of the crucial sweeps month — were bound to generate a torrent of publicity.

Shari Anne Brill, a television analyst for the Madison Avenue firm Carat USA, predicted public interest would rival that of the 2003 interview with Michael Jackson, seen by 27 million people.

At least one other network, NBC, said it had been approached to air the special but declined the offer.

"This is not a project appropriate for our network," said Rebecca Marks, a spokeswoman for the entertainment division of NBC, a network that once employed Simpson as a football analyst.

Representatives for CBS and ABC did not immediately return calls for comment.

One expert noted that the justice system's protection against double jeopardy means Simpson's book, explosive as it may be, should not expose him to any new legal danger.

"He can write pretty much whatever he wants," said Laurie Levenson, a Loyola University law school professor and former federal prosecutor who has followed the case closely. "Unless he's confessing to killing somebody else, he can probably do this with impunity."