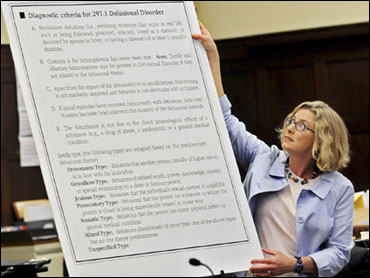 A psychologist testifying for the defense in the kidnapping trial of the man who calls himself Clark Rockefeller says he is "completely deluded" and not responsible for his actions.

Forensic psychologist Catherine Howe testified that Rockefeller has delusional and narcissistic disorders that impair his ability to recognize the wrongfulness of his conduct.

Rockefeller's real name is Christian Karl Gerhartsreiter. The defense claims he was legally insane when he kidnapped his 7-year-old daughter last July during a supervised visit in Boston.

Prosecutors say Gerhartsreiter is a German-born con man who is a consummate liar. They say he was perfectly sane when he took his daughter after losing custody of the girl to his ex-wife.

Peg Rusconi of CBS Station WBZ in Boston is covering the trial and blogging from the courthouse.

A year after her daughter's disappearance and subsequent return, Sandra Boss, ex-wife of the accused kidnapper, spoke for the first time in a Boston courtroom Monday about the man she would only refer to as "the defendant."

During testimony she described how the two met at a "Clue-themed" party in 1993 - she was dressed as Ms. Scarlet, Rockefeller as Professor Plum.

Boss described him as "very intelligent, very polite, could talk about anything … also, really very charming."