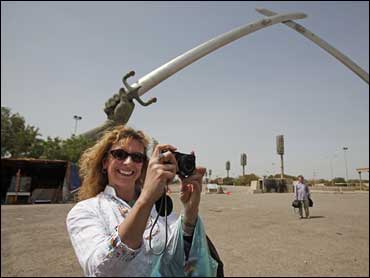 The Western tourists had their own reasons for joining the sightseeing tour: One wanted a glimpse of ancient ruins, another liked to visit countries in the news.

But traveling Iraq for two weeks in the first organized tour since 2003 wasn't quite all they had hoped, what with the hours wasted at checkpoints, and visits cut short or scrapped altogether because of security concerns.

The eight adventurers included four men and four women from Britain, the United States and Canada. They said they made it from the northern city of Irbil to the southeastern tip of Basra - about 560 miles with side trips in between - without directly encountering the violence that has been a hallmark of Iraq's daily life for so many years.

"It's really affirmation in many ways that security has improved - the fact that we were able to travel to so many places," said David Chung, a 36-year-old employee of an investment management firm in New York.

The journey, scheduled to end Sunday after a tour of the ancient ruins of Babylon, gave the travelers a taste of the hardships facing Iraqis as they emerge from war, ranging from electricity shortages to traffic jams to the overwhelming presence of U.S. and Iraqi security forces.

The travelers got quizzical glances but said they never felt in danger, although explosions sounded near their hotel in Baghdad late Friday on the sixth anniversary of the U.S. invasion.

"We just would not have been allowed to come here if it was too dangerous," Bridgett Jones, a 77-year-old historical researcher from London, said as she drank a glass of red wine in the hotel lobby. "I never felt any hostility."

She said she bought the wine at a local liquor store.

Navigating the checkpoints proved the greatest hassle. Roberta Wong, a 58-year-old former librarian from Vancouver, said she counted 40 blockades from the southern city of Basra to Baghdad, a 340-mile trip, and 24 on the 217 miles from the northern Kurdish city of Irbil to the capital. 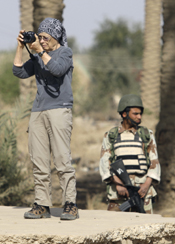 (AP Photo/Hadi Mizban)
She had plenty of time to keep track during the hours they were held up by guards unsure what to make of the bus full of Westerners.

"You appreciated that they had to have the security. If they didn't have the security we couldn't have been here," said Jo Gilbert, 79, of Menlo Park, Calif. "But there's no way between the checkpoints and the speed bumps that you're going to get anywhere fast."

The tourists also were disappointed that they didn't get to see Iraq's restored National Museum, infamously looted as U.S. forces seized control of Baghdad in 2003 and recently reopened to great fanfare. Iraqi authorities reneged on promises to let the group visit this time around.

"There were various sites that we couldn't get to because we were told they were too dangerous or because they were occupied by the Iraqi military," said Geoff Hann, the British managing director of Hinterland Travel.

The Westerners even went to the site of the destroyed golden domed shrine in Samarra, one of the holiest sites of Shiite Islam, where a 2006 bombing triggered months of sectarian violence. But the visit was short due to security concerns.

On Saturday, the tourists traveled south of Baghdad to see the Ctesiphon Arch, a Persian ruin on the Tigris River near Salman Pak - once one of Iraq's most dangerous towns. 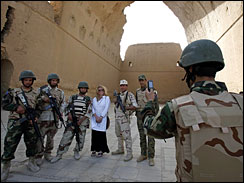 (AP Photo/Hadi Mizban)
(Left: Iraqi Army soldiers pose with Tina Townsend Greaves at the Ctesiphon Arch, a Persian ruin on the Tigris River near Salman Pak, once one of Iraq's most dangerous towns south of Baghdad, March 21, 2009.)

They also went to the heart of the American effort in Iraq, the heavily-protected Green Zone, and had their picture taken with U.S. soldiers at the famous Crossed Swords landmark. The arches, depicting two hands holding swords, lead into parade grounds that Saddam Hussein had built after the Iran-Iraq war.

In a reminder of the dangers that still face Iraqis, a member of a Sunni group that has turned against al Qaeda in Iraq was killed Saturday when a bomb attached to his car exploded in a village south of Baghdad.

Some Westerners have tried to visit Iraq unofficially but usually have been expelled by the military. Shiite pilgrims from Iran and other regional countries frequently travel to holy sites.

But the current trip marked the first officially organized and sanctioned visit by Western tourists outside the semiautonomous Kurdish region since the U.S.-led invasion in March 2003.

Hann, who plans more trips in the near future said Iraq is ready to receive tourists - but just barely.

"Administratively it's been difficult and the checkpoints have been difficult," he said, adding it "will take a lot of effort and a lot of hard work."
By Associated Press Writer Kim Gamel