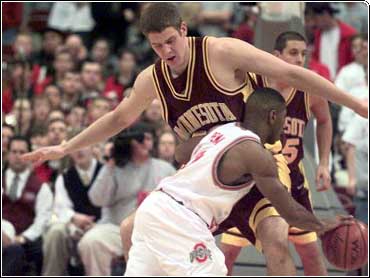 Joel Przybilla has had enough. He wants to leave college for the NBA.

The 7-foot-1 sophomore center for Minnesota was suspended last week by coach Dan Monson for skipping classes. Przybilla blamed his suspension on a lack of communication and said he would not return to the team.

Speaking publicly Saturday for the first time since his suspension, Przybilla told the Star Tribune his father is hiring an agent. The goal is to make him a lottery pick in the NBA draft June 6.

"I made a mistake by not attending classes on a regular basis," said Przybilla, adding his grade-point average was over 2.0 and he never was in danger of being ineligible.

"Coach Monson had warned me about going to class, but I thought he made a bigger thing out of it than it really was," he said.

He said he did not want to be critical of Monson but they "seldom talked."

Monson confirmed Przybilla was not in danger of becoming ineligible under NCAA rules, but said his leading scorer had plenty of warning.

"On this, we had more communication than with any other player," Monson told the Star Tribune.

The Gophers lost their past two games without Przybilla, who averaged 14.2 points and 8.4 rebounds a game. They were beaten by Purdue 97-61 Saturday in West Lafayette, Ind. Przybilla averaged 17.2 points a game in Big Ten play, and led the conference in field-goal percentage (.614) and rebounds (11.2).

"My real feelings right now - are for the 10 guys that have to go to West Lafayette and endure something like yesterday. That's where I feel the most disappointed," Monson told WCCO Radio on Sunday.

Monson replaced Clem Haskins, who recruited Przybilla and coached him last season but left the university after widespread academic fraud was found in the men's basketball program.

"I'm sure that if Clem Haskins was still coaching the team, I would still be playing basketball for Minnesota," Przybilla said. "Clem and I had a great relationship. I promised Clem when he recruited me that I would spend four years at Minnesota, and that was my plan. However, it was Clem who suggested that if I had a great junior season it might be smart to maybe turn pro."

Przybilla said he never gave any thought to transferring when Haskins left.

"At that time I had no idea but to play four years at Minnesota and then turn pro," he said.

But Przybilla is convinced he's ready for the NBA.

"My dad has visited on the phone with several agents in the last 24 or 48 hours since we made our final decision, and the agents tell my father that I will definitely be a lottery pick," he said.

Monson told WCCO he wished Przybilla well in the draft, but he questions the advice his center is getting.

"Obviously the agents are going t tell these athletes what they want to hear, and that's something that's unfortunate," Monson said.

Przybilla said the negative response to his leaving school had been far stronger than what he expected.

"I've been hiding out at my girlfriend's house and different places because of the reaction," he said. "I'll be glad to get out of town and to work on improving my game so I can make it big in the NBA."