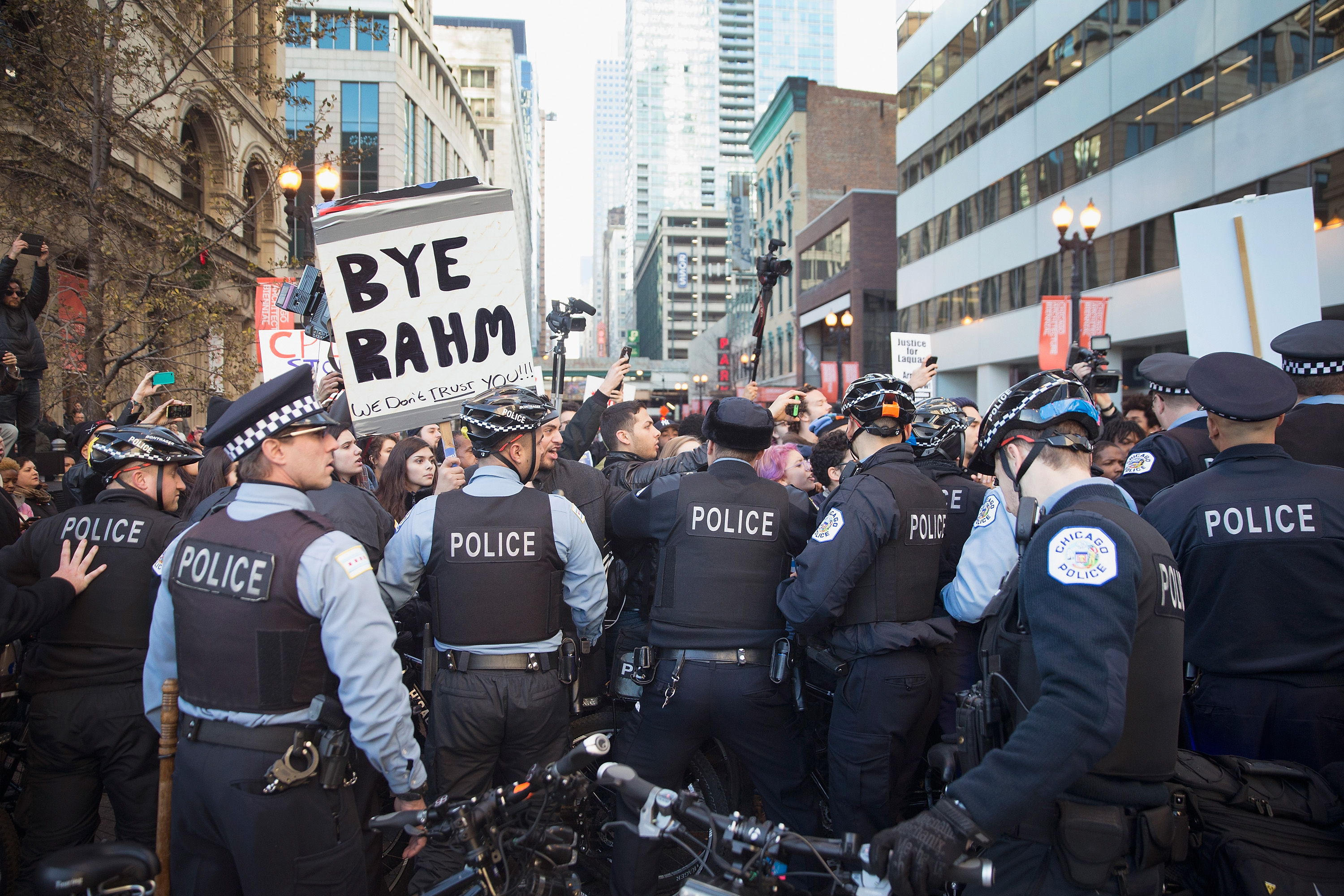 CHICAGO -- Protesters who have been calling for Mayor Rahm Emanuel to resign ever since video of the fatal police shooting of 17-year-old Laquan McDonald was made public were not moved by the mayor's apology on Wednesday, reports CBS Chicago.

Hundreds of protesters are marching through the streets near Chicago's City Hall, blocking traffic and chanting, "16 shots and a cover-up" and "Shut it down."

The crowd, which set out from Daley Plaza in the early afternoon, was peaceful but angry.

On Wednesday, the mayor apologized for the 2014 shooting of a black teenager during a special City Council meeting that he called to discuss a police abuse scandal at the center of the biggest crisis of his administration, and promised "complete and total" reform to restore trust in the police.

CBS Chicago reports several protesters stood just outside the City Council chamber as Emanuel was speaking, and at one point, a bit of chaos erupted as some protesters began shoving each other, before others stepped in to calm things down.

One local minister told CBS Chicago he's not convinced the mayor will bring any real change to the Chicago Police Department.

"We just witnessed the mayor basically put a Band-Aid on a gunshot wound," said Bishop James Dukes, pastor of Liberation Christian Center in Englewood. "I think it was politically driven. I think he had to give a distinctive apology, at least say he was sorry, but the intent that was involved in it, I don't think is there."

Emanuel addressed three main themes in his passionate speech: justice, culture and community. He also criticized the police department, which is being investigated by the U.S. Department of Justice, for being quick to shoot, saying the department's "supervision and leadership," as well as the oversight agencies, failed.

"I take responsibility for what happened because it happened on my watch. And if we're going to fix it I want you to understand it's my responsibility with you," Emanuel said. "But if we're also going to begin the healing process, the first step in that journey is my step.

The mayor also spoke of residents' mistrust of Chicago police, saying it's unacceptable that there are parents in Chicago who feel they must warn their children to be wary of officers.

At least four different groups of protesters planned to converge on City Hall on Wednesday. A protester who was at City Hall before Emanuel's speech said the mayor must step aside.

"If he doesn't step down, there are going to be protests again and again," said Jim Rudd, a 25-year-old coffee shop worker. "And he's going to eventually lose the support of the City Council."

CBS Chicago reports among the protesters at City Hall was the family of Philip Coleman, an African-American man who died in police custody in 2012, after officers repeatedly stunned him with a Taser and dragged him out of a holding cell in handcuffs.

Coleman was being held at the Calumet District police station after suffering a mental breakdown and allegedly attacking his mother in December 2012. His family said he needed to go to a hospital, but officers told them "They don't do hospitals. They do jails."

"We're not just going to go away. We are going to be very visible for a very long time. It's been a long time coming; three years. That's too long," said Coleman's brother, Jeff.