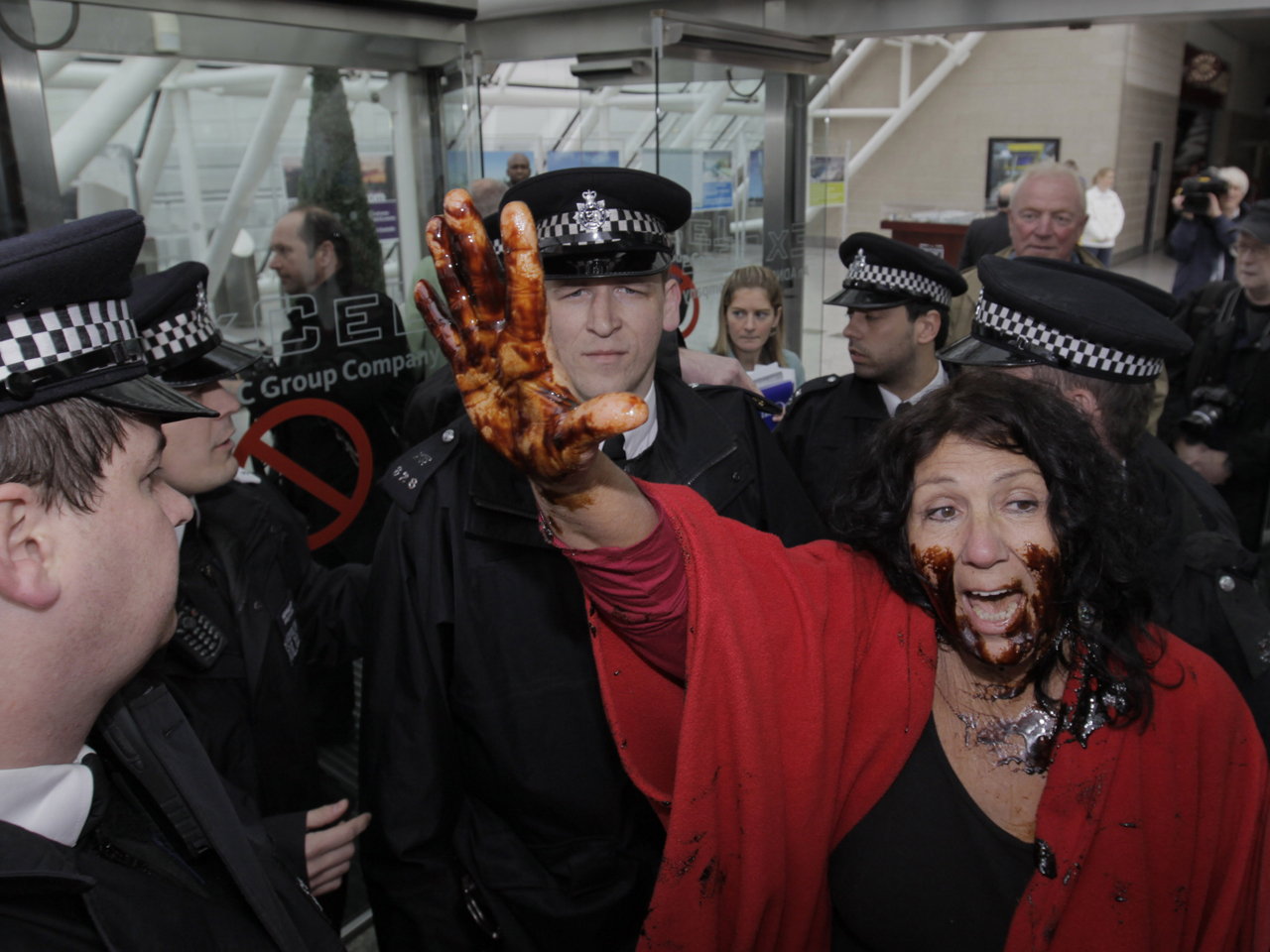 LONDON - Rowdy protesters scuffled with security and police outside BP's annual shareholder meeting Thursday, after Gulf Coast residents were denied a chance to enter the meeting to air compensation demands.

The raucous start of the session inside the vast ExCel center in London's Docklands district came as BP CEO Bob Dudley faced protest votes over executive pay and questions about a stalled major deal in Russia.

One woman from Texas was arrested and four others were ejected from the session — just before Dudley rose to the podium and told shareholders that "BP remains a great company with a great history and I believe a great future."

"Not every company gets such an opportunity and we don't intend to squander it," he added, stressing BP's three priorities are strengthening safety, winning back the company's reputation and restoring long-term value for shareholders.

Complete coverage: Disaster in the Gulf

Dudley said management intended to recommend to the board the appointment of an external expert to implement the recommendations of an internal report into the spill — as it did after the deadly Texas refinery explosion.

"We're finding it isn't so easy to find someone. We want to make sure that person is independent and experienced. With the prices of oil, everybody wants somebody like that."

Dudley also acknowledged unhappiness with a lack of detail about safety improvements in the company's annual report, agreeing information was "light" but would be stronger this year.

The company gained some critical breathing room on another major problem, however — at the last minute, it received an extension to the Thursday deadline to complete a stalled major deal in Russia.

Just ahead of the annual general meeting, BP said Russia's OAO Rosneft had agreed to move the deadline to complete a $16 billion share swap to May 16. The deal was blocked in court by a quartet of Russian billionaires, BP's partners in the older TNK-BP venture.

Rosneft had initially refused to budge on the deadline, throwing the deal into doubt and casting a shadow over the shareholder meeting — the first since the Macondo well blowout in the Gulf almost a year ago that sparked off the biggest oil spill in U.S. history.

Live drums and brass provided a soundtrack for the crowds of protesters gathered outside the meeting's building, watched over by a light police presence. One Gulf Coast resident who was given a proxy vote from a sympathetic shareholder was locked out of the meeting.

"I've come all the way here from the Gulf Coast," said Diane Wilson, a fourth-generation fisherwoman from Seadrift, Texas. "My community is gone, and they won't let me in.

Chairman Carl-Henric Svanberg told shareholders that security didn't allow them to enter because it thought they would disrupt the meeting.

Indigenous communities angry at the company's involvement in tar sands extraction in Canada and scores of local workers embroiled in a dispute at a BP-owned biofuels plant in northern England, also protested.

Adding to BP's woes, two of the world's biggest pension funds have added their names to a growing list of investors planning to vote against the company's annual report at the meeting. Complaints include the level of executive bonuses and the re-election of a key safety executive.

BP PLC investors who have watched the company lose a quarter of its market value, or some $55 billion, in the past 12 months, as well as losing their valuable dividend payments, are ready to put the company on the spot.

The meeting is taking place just days shy of the anniversary of the explosion that killed 11 workers and began the spill that has so far cost BP some $40 billion — and former CEO Tony Hayward his job.

Byron Encalade, president of the Louisiana Oystermen Association and one of those ejected, had said wanted to object to the compensation process, claiming many oystermen have been denied payments or given insufficient payouts.

"We've not been made whole: our fishing grounds have been depleted, our oysters are dead and we're not receiving the funds we need to support and sustain ourselves," Encalade said. "We're seeing money going everywhere but at ground zero. We're the communities at ground zero, the first to be put out of work and we're going to be the last to be able to go back to work and sustain ourselves."

Pressure from institutional shareholders is also growing on Dudley, the first American to lead the British oil company since taking over in October.

Calpers, the biggest U.S. public pension fund, and the Florida State Board of Administration have said they will join other smaller U.S. and European religious and ethical funds in voting against the reappointment of Bill Castell, the head of the safety, ethics and environment assurance committee. The two state pension boards together own some 0.4 percent of BP's total stock.

And both Pirc, the investor advice service, and the Association of British Insurers have issued warnings about excessive pay packages for two BP executives. Iain Conn, BP's head of refining and Chief Financial Officer Byron Grote are receiving $505,000 and $621,000 for their performances not related to the oil spill.

Hayward has also grabbed headlines with a $17.9 million pension, $1.6 million payoff and about $13 million in share options despite a series of public gaffes that led to his ceding the CEO post to Dudley.

Dudley is unlikely to face any direct criticism on this front though as he's waived his bonus this year.

However, he will be under pressure to explain the stalled share swap with Russia's OAO Rosneft. The deal was to cement BP's move forward from the Gulf spill and show it no longer needed to rely so heavily on the United States, where it is still barred from drilling in the Gulf.

While BP has successfully gained some breathing room by getting Rosneft to extend the deadline, the injunction remains.

BP said Thursday it would continue with the court-appointed arbitration process to "obtain a final award on all outstanding issues."