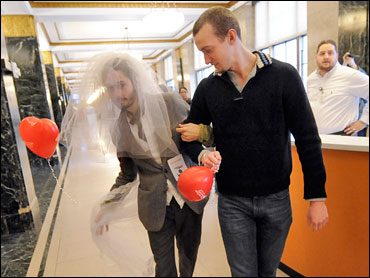 Same-sex couples seeking to wed showed up at marriage license counters nationwide Thursday to highlight a right they don't have in 48 states, part of an annual protest that took on renewed urgency given recent election setbacks.

In San Francisco, where same-sex marriage was legal for nearly five months last year before California voters approved a ban, many couples who came to City Hall had already tied the knot but wanted to express their gratitude and to show they're still part of the fight.

"All of our marriages are under the cloud of Proposition 8," said Stuart Gaffney, 45, referring to California's ballot initiative banning gay marriage. "Equality is an unfinished business in California."

In Las Vegas, couples gathered outside the downtown marriage bureau with signs that read "Don't hate my love" and "No laws on love." In New York, activists wore signs that said "Just Not Married." They were turned away empty-handed in both places when they asked for marriage licenses.

"We could get married in Massachusetts or Connecticut, but we'll wait a little and see what happens in New York," Matt Flanders, 37, of Brooklyn, said after he and his partner, Will Jennings, 29, participated in the protest in Manhattan. "It's a matter of principle. This is our home, and we should be able to get married where we live, where our friends are."

The protests around Valentine's Day, part of the 12th annual Freedom to Marry Day, were considered especially important this year because they come after the November passage of Proposition 8. The measure has prompted protests, lawsuits and questions about the direction of the gay rights movement.

"A lot of people feel a sense of determination and regret over having been too complacent or quiet before, so there is a commitment to, `Never again, we have to take action,"' said Evan Wolfson, a civil rights lawyer who conceived Freedom to Marry Day. "In that sense, California was a terrific energizer and wake-up call."

Currently, gay marriage is legal only in Massachusetts and Connecticut, while 30 states have gay marriage bans in their constitutions. Gay rights activists are pressing lawmakers in New Jersey, New York and Vermont to take up bills that would legalize same-sex marriage in those states.

Jennifer Pizer, director of the marriage project at gay rights legal group Lambda Legal, said the disappointing outcome of the California election has created momentum in other parts of the country.

Hawaii's House of Representatives, for example, voted 33-17 Thursday to allow same-sex civil unions. The legislation now goes before the state's Senate Judiciary Committee, where the vote is split among six senators, with one undecided. A tie vote would kill the civil union measure for the year.

In Utah, where a constitutional amendment approved by voters in 2004 prohibits same-sex unions, five gay and lesbian couples applied for marriage licenses in Salt Lake City on Thursday. County Clerk Sherrie Swensen said she could recall only one other gay couple asking to get married over the last 18 years.

In Maine and Minnesota on Thursday, dozens of proponents of gay marriage gathered outside the statehouses to lobby for bills that would legalize same-sex marriage in those states. Under a black and white banner that read "Legalize Love," Minnesota lawmakers vowed to push the bill as far as they can.

State Sen. Scott Dibble, a Minneapolis Democrat who is one of the few openly gay members of the Legislature, said the country's economic woes showed the need for couples to support each other. But gay couples can't get many of the benefits of marriage that might make things easier, he said.

Troy Smith, 41, and his partner of six years, Justin Gibson, 26, were among the 15 couples waiting with tourists outside the marriage bureau in downtown Las Vegas. Smith, a coordinator at a local wedding chapel, said he's constantly faced with the reality of Nevada's constitutional ban on gay marriage.

"I sell it every day, but I can't buy it myself," he said, adding that he often sees couples rushing to the altar after knowing each other for hours. "It just about breaks my heart. It's not fair."

The California Supreme Court is scheduled to hear oral arguments next month on whether to uphold Proposition 8 and on the validity of the estimated 18,000 same-sex marriages sanctioned in the state between June and November. The court could render a decision as early as June.