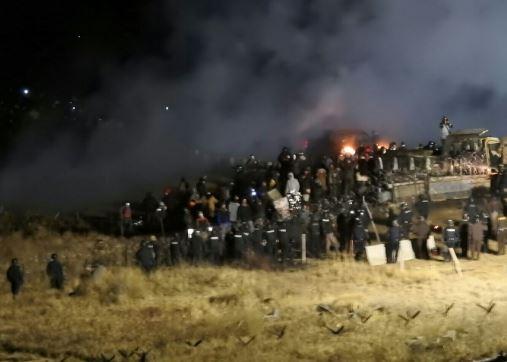 CANNON BALL, N.D. --Law enforcement and protesters clashed late Sunday near the site of the Dakota Access pipeline, with at least one person arrested as protesters sought to push past a bridge on a state highway that had been blockaded since late October.

The Morton County Sheriff’s Office estimated 400 protesters were seeking to get past the bridge on state Highway 1806 in what they called “an ongoing riot.” Law enforcement had formed a line to prevent their movement.

According to police, the confrontation began around 6 p.m. Sunday night, where a previously burned vehicle was removed by protesters, CBS affiliate KXMB reported. Law enforcement claims the incident escalated from there.

The clash was at the Backwater Bridge, near where protesters had set up camp on private property owned by the pipeline developer, Energy Transfer Partners, before they were forcibly removed by law enforcement in October.

At least one person had been arrested.

A video shot by a protester shows what appear to be water cannons and tear gas being fired at protesters.

The 1,200-mile, four-state pipeline is being built to carry oil from western North Dakota to a shipping point in Illinois. But its construction has been protested for months by the Standing Rock Sioux, whose reservation lies near the pipeline route, and the tribe’s allies, who fear a leak could contaminate their drinking water. They also worry that construction could threaten sacred sites.

Energy Transfer Partners has said no sites have been disturbed and that the pipeline will have safeguards against leaks, and is a safer method of transport for oil than rail or truck. The company has said the pipeline is largely complete except for a short section to be built under Lake Oahe, a Missouri River reservoir near where protests have occurred.

The bridge was closed after it was damaged by fire in October, shortly after law enforcement moved in to evict protesters from private property owned by the pipeline developer.