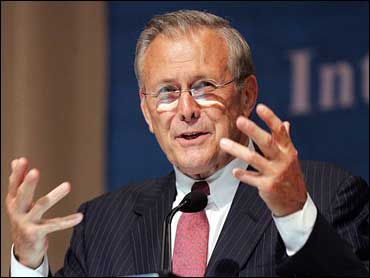 Protesters repeatedly interrupted Defense Secretary Donald H. Rumsfeld during a speech Thursday and one man, a former CIA analyst, accused him of lying about Iraq prewar intelligence in an unusually vociferous display of anti-war sentiment.

Run-of-the-mill hecklers were hauled off, but Ray McGovern, the former analyst, waited his turn to ask a question and then went for Rumsfeld's throat, reports CBS News national security correspondent David Martin.

"Why did you lie to get us into a war that caused these kind of casualties and was not necessary?" McGovern asked during a question-and-answer session.

"I did not lie," shot back Rumsfeld, who waved off security guards ready to remove McGovern from the hall at the Southern Center for International Studies.

With Iraq war support remaining low in opinion polls, it is not unusual for top Bush administration officials to encounter protests and hostile questions. But the outbursts Rumsfeld confronted on Thursday seemed beyond the usual.

Three protesters were escorted away by security as each interrupted Rumsfeld's speech by jumping up and shouting anti-war messages. Throughout the speech, a fourth protester stood in the middle of the room with his back to Rumsfeld in silent protest. Officials reported no arrests.

Rumsfeld also faced tough questions from a woman identifying herself as Patricia Roberts of Lithonia, Ga., who said her son, 22-year-old Spc. Jamaal Addison, was killed in Iraq. Roberts said she is now raising her young grandson and asked whether the government could provide any help.

Rumsfeld referred her to a Web site listing aid organizations.

President Bush seldom faces such challenges. Demonstrators usually are kept far from him when he delivers public remarks.

Rumsfeld has been interrupted by anti-war demonstrators in congressional hearing rooms as he has delivered testimony to lawmakers in recent months, and at some speeches around the country.

Secretary of State Condoleezza Rice has had direct confrontations overseas. These include demonstrators who called her a murderer and war criminal in Australia in March, and throngs of anti-war protesters who dogged her every move in northern England in April.

Demonstrators were kept far away from Rice during a visit last week to Greece, where riot police confronted a violent street mob that smashed shop windows in protest of U.S. policies and Rice's role in the U.S.-led invasion of Iraq.

More than half of Americans say the war in Iraq was not worth the cost financially or in loss of life, recent public polling has found. Just over one-third of those surveyed say they approve of Mr. Bush's handing of the war. Public sentiment about the war has been at those low levels since fall.

Just over one-third of the public says Rumsfeld is doing an excellent or pretty good job, according to polling in March, while six in 10 rated his performance as fair or poor.

In the run-up to the March 2003 invasion of Iraq, the Bush administration repeatedly spoke of evidence that Saddam Hussein had acquired weapons of mass destruction. No such armaments have been found. Officials also spoke about connections between Saddam and al Qaeda that critics say remain unproven.

In recent weeks, at least a half dozen retired generals have called for Rumsfeld's resignation, saying he has ignored advice offered by military officers and made strategic errors in the Iraq war, including committing too few troops. But he has received strong backing by Mr. Bush, who repeatedly has indicated he will keep Rumsfeld at the Pentagon.

When security guards tried removing McGovern during his persistent questions of Rumsfeld, the defense secretary told them to let him stay. The two continued to spar.

"You're getting plenty of play," Rumsfeld told McGovern, who is an outspoken critic of the war in Iraq.

Responding to another protester who also accused Rumsfeld of lying, the secretary said such accusations are "so wrong, so unfair and so destructive."

At one point, Rumsfeld was praised by an audience member who said he had followed Rumsfeld's career and wondered what in his upbringing had shaped his positive outlook on life.

"I guess one thing I'd say is that my mom was a school teacher and my dad read history voraciously. And I guess I adopted some of those patterns of reading history," Rumsfeld replied.

Rumsfeld focused his speech on a U.S. need to increase its emphasis on more flexible partnerships with foreign militaries and rethinking of the role of long-established alliances like NATO.

He called such changes "necessary adjustments, based on the new realities and the new threats that have emerged since the end of the Cold War."

He also said, "We need ways to make sure we're better understood in the world than we are."

Rumsfeld also likened the conflicts in Iraq and Afghanistan to the Cold War.