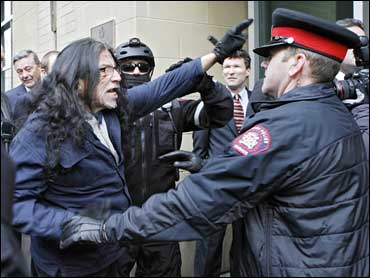 (AP)
George W. Bush may no longer be president, but he hasn't lost the ability to bring out protesters.

Mr. Bush is making his first appearance abroad since leaving office in Alberta, Canada today. His luncheon speech at Calgary's Telus Convention Centre attracted about 1,500 invited guests – who were met upon their arrival by between 200 and 300 protesters, according to the Edmonton Sun.

One protester was reportedly arrested after calling the former president a war criminal, signaling his intent to make a citizen's arrest and trying to enter the building.

AFP reports that protesters amassed shoes from across the country to throw at an effigy of Mr. Bush outside the convention center. Colette Lemieux of the Canadian Peace Alliance said, "It doesn't matter that he is no longer president – a bank robber who stops holding up banks can and must still be prosecuted for his crimes."

The president plans to give 10 speeches in Canada, Asia and Europe, of which this is the first, according to an AFP source. Today's event is being billed as "A Conversation with George W. Bush."

According to the Washington Speaker's Bureau, the former president is offering "his thoughts on eight years in the Oval Office, the challenges facing our nation in the 21st century, the power of freedom, the role of faith, and other pressing issues."

Some guests reportedly paid more than 400 Canadian dollars ($315 U.S.) to attend the luncheon.

Monday night, Mr. Bush had dinner out in Calgary, eating pasta and fruit salad; according to the Calgary Herald, he was a "jovial and friendly" guest who chatted and posed for pictures.

Said one excited resident of the neighborhood where the former president dined: "Who doesn't love to see a celebrity?"