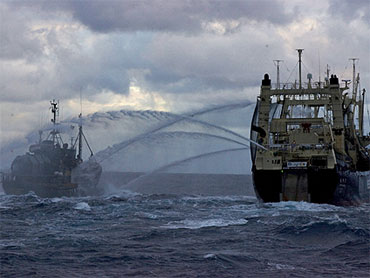 Three crew members of a Japanese whaling vessel suffered face and eye injuries from acid fired by anti-whaling protesters during their latest clash in the Antarctic Ocean, their Japanese employers said Friday.

The Sea Shepherd protesters said they shot butyric acid, produced from stinking rancid butter, which they often aim at the whalers to try to disrupt the annual Japanese hunt. The activists maintain that butyric acid is nontoxic.

The injuries Thursday were the first to Japanese whalers this year during confrontations with Sea Shepherd, although there have been two ship collisions that each side blamed on the other.

Japanese Fisheries Minister Hirotaka Akamatsu lashed out at the activists on Friday, telling reporters: "I am full of rage. I could not believe they did such a thing."

Glenn Inwood, spokesman for Japan's Institute of Cetacean Research, which sponsors the hunt, said the injuries were not serious, but he cautioned that butyric acid can cause temporary blindness.

The injuries occurred during a several-hour confrontation between two Sea Shepherd boats - the Steve Irwin and the Bob Barker - and four Japanese vessels.

Locky Maclean, first mate on the Steve Irwin, told The Associated Press that the Nisshin Maru, a whale processing ship, started the altercation when it turned its water cannons on the activists' vessels.

The protesters targeted the Japanese ships Shonan Maru No. 2 and the Nisshin Maru, dragging wires across their bows in a bid to tangle their rudders and propellers, the Institute of Cetacean Research said in a statement.

Japan has a six-vessel whaling fleet in Antarctic waters as part of a research program, an allowed exception to the International Whaling Commission's 1986 ban on commercial whaling. It hunts hundreds of mostly minke whales, which are not an endangered species. Whale meat not used for study is sold for consumption in Japan, which critics say is the real reason for the hunts.

Sea Shepherd, a U.S.-based activist group, sends vessels to confront the Japanese fleet each year, trying to block them from firing harpoons at the whales.

"It's been a successful week," Maclean said. "No whales have died for the last eight days we have been trailing the Nisshin Maru."

Last week, the Bob Barker and a Japanese harpoon boat collided, causing minor damage to both vessels. On Jan. 6, a Japanese whaler struck Sea Shepherd's high-tech speedboat Ady Gil, which sank a day later. No one was seriously injured in those incidents.