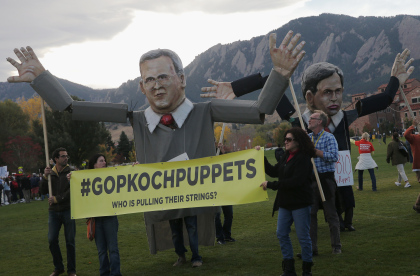 Many of the protesters outside the Coors Events Center on the University of Colorado campus where the event is being held told CBS4 before the debate that the participating candidates are ignoring issues that are important to them.

Light planes with protest messages also flew over the campus. One such message -- GOP HAS A #KOCHPROBLEM -- referred to the Koch brothers who have provided financial support to a few of the Republican candidates.

Some who gathered in protest in Boulder told CBS4 they are part of non-partisan groups and want all candidates to address issues like racial and religious equality, climate change and the economy.

Some protesters marched across campus to the area known as the free speech zone set up by police for the protesters, and some in the crowd were children. Rally organizers CBS4 spoke with said they wanted the protests to be safe and family friendly.