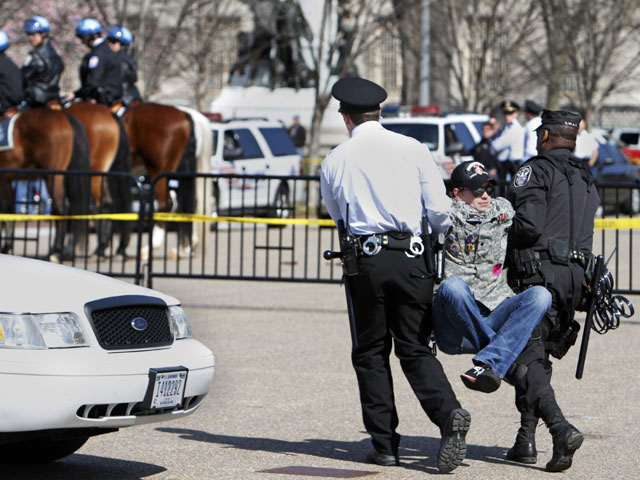 WASHINGTON - More than 100 anti-war protesters, including the man who leaked the Pentagon Papers, were arrested outside the White House on Saturday in demonstrations marking the eighth anniversary of the U.S.-led war in Iraq.

The protesters, some shouting anti-war slogans and singing "We Shall Not Be Moved," were arrested after ignoring orders to move away from the gates of the White House. The demonstrators cheered loudly as Daniel Ellsberg, the former military analyst who in 1971 leaked the Pentagon's secret history of the Vietnam War that was later published in major newspapers, was arrested and led away by police.

In New York City, about 80 protesters gathered near the U.S. military recruiting center in Times Square, chanting "No to war" and carrying banners that read, "I am not paying for war" and "Butter not guns."

Similar protests marking the start of the Iraq war were also planned Saturday in Chicago, San Francisco and other cities.

The demonstration in Washington on Saturday merged varied causes, including protesters demanding a U.S. military withdrawal from Iraq and Afghanistan as well as those supporting Bradley Manning, the jailed Army private suspected of giving classified documents to the website Wikileaks.

One chant that was repeated was: "Stop the War! Expose the Lies! Free Bradley Manning!"

There was little talk of the U.S. missile strikes against Moammar Gadhafi's forces in Libya on Saturday, part of an international effort to protect rebel forces.

Ellsberg has publicly defended Manning, calling him a "brother," and Wikileaks.

Hundreds of protesters attended the rally and marched around the White House, but the crowd - which included many military veterans - thinned considerably as the U.S. Park Police warned that they'd be arrested if they didn't move. As officers moved in with handcuffs, one protester who clutched the gates outside the White House shouted, "Don't arrest them! Arrest Obama!" and "You're arresting veterans, not war criminals!"

Authorities said 113 protesters were arrested, processed and given violation notices for disobeying an official order. They could pay a small fine and be released, or be freed with a future court date.

"The majority were cooperative," said U.S. Park Police spokesman David Schlosser. "A couple had to be carried, but altogether a polite and orderly crowd."

One military veteran who showed up for the rally was Paul Markin, a 64-year-old retired Army colonel from Lynn, Mass., who said he's frustrated by what he sees as the U.S. government's escalation of the wars. He said he's been against wars since coming home from Vietnam.

"Ever since that time, I've gone to the other side. Instead of a warrior, an anti-warrior," Markin said.

Ralph Nader, a consumer advocate who's unsuccessfully run several times for president, attended the demonstration and said anti-war protesters needed to continue putting pressure on government leaders. He said he believed most Americans and even soldiers agreed with the views of the protesters