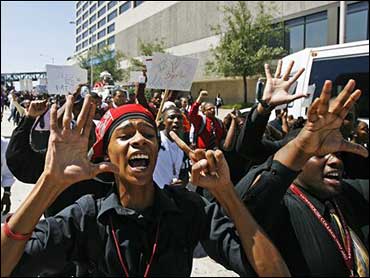 The streets around this tiny town's courthouse began filling with protesters and reporters Wednesday, a day ahead of a planned march in support of six black teenagers jailed in the December beating of a white classmate.

Thursday's march was expected to draw thousands, perhaps tens of thousands of people, dwarfing Jena's population of about 3,500. Black participants said they hoped to rekindle the spirit of the civil rights movement.

"This is the first time I've done anything like this, on this magnitude at least," said Nathaniel Ford, 47, a computer technician who traveled from Richmond, Va.

Ford said he remembers his parents' stories of Dr. Martin Luther King Jr. and the struggles of the 1950s and 1960s. "I hope this is the beginning and not a one-time situation."

Students from schools across the country - including historically black colleges like Morehouse College, Spelman College and Clark Atlanta University, Howard University, Hampton University and Southern University - were en route to Jena on Wednesday. The case has resonated with young people, said Jeff Johnson, an activist and organizer who is covering the Jena rally for Black Entertainment Television.

"It does not happen often, where there's something that catches fire and really creates a mass movement of students," Johnson said as he boarded a Louisiana-bound plane in Atlanta.

The Rev. Jesse Jackson likened the gathering protest to historic events in Montgomery and Selma, Ala., and Little Rock, Ark.

But for many residents of this predominantly white town, Thursday's march is a bitter pill - the result, they said, of overblown and unfair media coverage. Most wouldn't comment and those who did were visibly irritated or angry.

"This isn't a racist town. It never has been. We didn't even have fist fights when the schools were integrated," said a white man who refused to give his name or comment further.

"Not no, but hell no," another man said angrily when asked to comment.

Still, town and state officials said this week they wanted the demonstrators to be welcome and comfortable and the resistance demonstrators met in the '50s and '60s was nowhere evident. State transportation workers were installing flashing message signs on the town streets that would aid with traffic and state police said portable toilets would be placed along the route.

At the center of the protests are a group of black teenagers who have come to be called the Jena Six. At issue is whether they have been treated fairly since racial tensions that began simmering at Jena High School more than a year ago when a black student expressed interest in sitting under a tree where whites usually congregated.

The next day, three nooses were found hanging from the tree; that led to the suspension of three white students and later reports of fights at the school, culminating in December's attack on white student Justin Barker, who was knocked unconscious, his face badly swollen and bloodied.

While one of the six black students was booked as a juvenile in the beating, five were charged as adults with attempted second-degree murder, which could have meant 50 years in prison for each. There followed protests that the charges were racially motivated and overblown. District Attorney Reed Walters has denied the accusation.

But the charges have since been reduced for all but one of the defendants.

Walters broke a long public silence Wednesday afternoon during a news conference outside the courthouse, accompanied by Barker and his parents, who all declined to speak.

Walters again denied that racism had anything to do with the charges and said Barker's suffering has been largely ignored. "With all the emphasis on the defendant, the injury done to him and the serious threat to his existence has become a footnote," Walters said.

He noted that aside from Bell and one other juvenile the other defendants in the case were all of adult age under Louisiana law. He also noted that Bell has a criminal record including juvenile convictions for damage to property and battery. And he also addressed the hanging of the nooses from the Jena High School tree. "I cannot overemphasize what a villainous act that was. The people that did it should be ashamed of what they unleashed on this town," Walters said. But he also added that he could find no statute in Louisiana law under which they could be prosecuted.

So far, the only one of the "Jena Six" to be tried is Mychal Bell, who was 16 at the time of the attack. His conviction on aggravated second-degree battery could have sent him to prison for 15 years, but it was overturned last week when a state appeal court said Bell, who has maintained his innocence in court, should not have been tried as an adult.

Bell remains jailed while prosecutors prepare an appeal of the latest court ruling. The Rev. Al Sharpton, an organizer of the protest, met Bell at the courthouse Wednesday morning.

"It breaks our hearts to see him in handcuffs and leg shackles, but his spirit is high," Sharpton said after the meeting.

Sharpton said Bell is heartened by the show of support and wants to make sure it stays peaceful.

"He doesn't want anything done that would disparage his name - no violence, not even a negative word," Sharpton said.

Marchers were expected to start gathering at 5 a.m. Thursday. The two-mile march was to begin at 7 a.m. and take protesters on a route that would pass Jena High - and the stump of the infamous tree that authorities had removed in July.

Some businesses in town planned to shut down during the demonstrations. Shirley Martin, whose daughter, Tina Norms, decided to close Cafe Martin on Wednesday, said she doubts it will open Thursday, even though the rally is expected to end by midmorning.

"That sounds fine. Maybe we can get our town back in order for us to work the next day," she said.

At least one business in town was trying to show civic pride. "Jena, La." said the T-shirts on display in one apparel store window. "Still a great place to call home."

In New Orleans, another entrepreneur was showing support for, and cashing in on, the protest. Charley "Whaler" Arceneaux said he had sold hundreds of "Free the Jena Six" T-shirts over the past several days. He planned to join Thursday's events, putting a sign saying "Closed: Gone to free the Jena Six" on the door of Whaler's Custom T-Shirts and Signs.