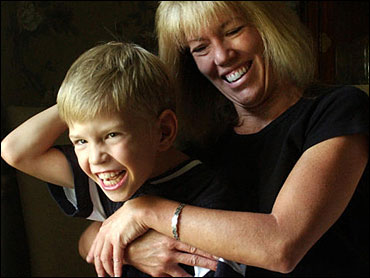 Susan Sheridan recalls frantically racing her days-old son to doctor after doctor because his skin was so yellow only to be assured that jaundice is a rite of infancy.

But as pediatricians looked on, the baby's neck suddenly arched backward and he began a strangely high-pitched, catlike howl.

"We all watched Cal suffer brain damage before our eyes," says Sheridan.

Jaundice strikes 60 percent of newborns as their livers slowly begin functioning in the first days of life. The vast majority recover easily. But a small percentage of babies suffer extreme jaundice that, if untreated, drastically damages their brains. Like Cal Sheridan, now 8, they're left with a severe type of cerebral palsy — his intellect untouched but trapped behind unworking muscles — or injuries such as hearing loss.

This is a preventable disability, once thought virtually vanquished. Nobody knows how many still are harmed. But, spurred by Sheridan and other anguished parents, federal health officials and a pediatricians' group are preparing new campaigns to protect babies from jaundiced-caused brain damage, and track for the first time how often it strikes.

"One case is one case too many," says Dr. Marshalyn Yeargin-Allsop of the Centers for Disease Control and Prevention.

The prevention plans aren't final yet. But topping the debate is whether all newborns should start getting a simple, $1 blood test to predict who's at risk for severe jaundice and the brain-damaging condition, called kernicterus.

The test measures bilirubin, a naturally occurring, yellowish byproduct of decomposing red cells that, at very high levels, is toxic to the brain. Today, many hospitals order bilirubin testing only if a newborn's jaundice appears bad — striking in the first 24 hours of life or worsening yellowing — or is accompanied by other risks such as poor feeding or prematurity.

But critics argue that routine testing would allow treatment with special fluorescent lights before babies' brains ever are at risk — especially important because jaundice usually peaks several days after infants go home from the hospital.

"We believe that if we implemented universal (bilirubin) screening, that babies would be protected," says CDC's Yeargin-Allsop.

But she cautions that CDC hasn't yet decided whether to formally recommend widespread testing because doctors aren't sure what level of bilirubin is a safe limit — part of the debate as the American Academy of Pediatrics prepares its own jaundice guidelines, due out this fall.

At the same time, a drug company is about to begin advanced testing of a shot created to curb jaundice in high-risk newborns by halting their bodies' production of bilirubin for about a week. The drug's inventor, Rockefeller University's Dr. Attallah Kappas, predicts it could dramatically cut the number of babies — roughly 100,000 — who undergo expensive, cumbersome light therapy for jaundice.

Called Stannsoporfin, it "is one of the most important new drugs being studied for pediatric use," Dr. Duane Alexander, head of the National Institutes of Health's child health division, told a recent federal meeting on newborn jaundice. "It is the only intervention on the horizon that holds out the prospect of completely eliminating ... kernicterus."

Jaundice-caused brain damage was somewhat common in the 1940s, before doctors found ways to prevent other conditions that made infants more vulnerable, and before light therapy emerged. By the 1980s, many doctors believed kernicterus eliminated.

But an informal registry in Pennsylvania has counted 125 cases in the last decade, a number feared far underestimated. In 2001, the group that accredits U.S. hospitals warned that kernicterus was re-emerging, possibly spurred by shorter newborn hospital stays.

While the specialists debate, Sheridan, wants parents to know about the risk in case they, like she did, come across doctors who don't realize the threat remains. The Boise, Idaho, mother is helping pediatricians develop a brochure for birthing centers that will list warning signs and stress the importance of a jaundice checkup two days after babies leave the hospital.

"My son was jaundiced at 16 hours. I didn't know that meant it was an emergency," she says. "Moms need to know."