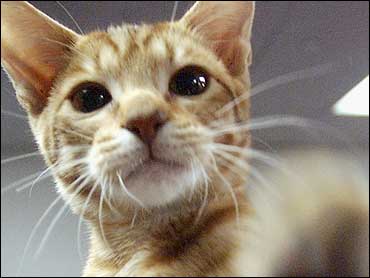 Recently word of domestic cats infected with bird flu in Europe are worrying owners of cats in the United States.

On The Satuday Early Show, resident veterinarian Dr. Debbye Turner sheds light on whether cats in the U.S. could be at risk. She also explains how cats could contract bird flu, and what pet owners can do to protect their feline friends.

While the virus that causes bird flu hasn't been found in the U.S., many experts believe it's just a matter of time. If that happens, your pets could be at risk.

Cats can become infected with the H5N1 virus, and it usually comes from ingestion of an infected bird. Of course, many cats hunt birds for food. And if they eat a bird that carries the bird flu virus, they are susceptible to infection. Although most wild birds infected with H5N1 are waterfowl, it's potentially infectious to pigeons and other birds that cats do interact with (the ones they hunt and eat).

According to Turner, cats have the potential to spread bird flu to humans, though that hasn't been seen by researchers, and many experts feel the possibility is quite slim. The concern, though, is that the virus might mutate in the feline or other carnivore hosts and lead to an outbreak in humans.

Stray cats increase the likelihood of spreading the virus, due to their transient nature. They roam, cover more area, and could potentially spread the virus over a wider area than house cats.

There's no need for panic or undue concern at this time, since H5N1 hasn't been found in the U.S., but experts and government officials recommend: