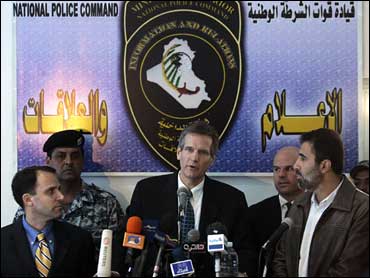 U.S. prosecutors Saturday visited the site of last year's shooting that left 17 Iraqis dead in a Baghdad square and briefed victims' families about the case against Blackwater Worldwide guards indicted in the deadly incident.

Five Blackwater guards were indicted this week on manslaughter and other charges for their alleged roles in the Sept. 16, 2007 shooting in Nisoor Square. A sixth guard reached a plea deal with prosecutors to avoid a mandatory 30-year prison sentence.

"The aim of our visit is to meet the families of the victims and explain the charges that have been filed in the United States and to make ourselves available to any questions they might have," U.S. prosecutor Kenneth Kohl told reporters in a brief statement at the police headquarters just off the square.

The case fueled Iraqi anger over what they perceive as heavy-handed behavior by private security contractors, who enjoyed blanket immunity from prosecution under Iraqi law.

U.S. investigators determined that Blackwater Worldwide guards had been involved in 70 shooting incidents involving civilians before Nisoor Square and only two since then.

A new U.S.-Iraqi security pact lifts security guard immunity, although it will be retained for on-duty American troops and contractors working with them.

Witnesses and an Iraqi investigation said the shooting on Nisoor Square was unprovoked, but Blackwater - the largest U.S. security contractor in Iraq - has said the guards were acting in self-defense after they were ambushed.

During a private meeting, Kohl repeatedly pressed Iraqi police commander Lt. Gen. Hussein al-Awadi whether any Iraqi policemen opened fire that day - presumably against the Blackwater guards, according to those who attended the talks.

Al-Awadi insisted that no policemen opened fire, the attendees said on condition of anonymity because they were not authorized to talk to media.

Kohl thanked the Iraqi police for their help and for helping tamp down public outrage over the killings. He said the U.S. investigation, which involved 250 interviews over several months, determined the shooting was unjustified and he was determined to prove it in court.

"People are people, as human beings," al-Awadi replied. "And the law is the law."

Al-Awadi said U.S. and Iraqi forces had blocked a second Blackwater Worldwide convoy from reaching the square after the shooting erupted.

"My husband was looking for a job at the square that day. When he reached the square, the security members killed him," said Milad Khalil, whose husband Odai Ismael was killed in the incident. "My two girls need money to cover the elementary school expenses."

(AP Photo/Khalid Mohammed)
Adel Jabr (left, showing his wounds from Nissor Square), said he wants punishment for the guards and compensation for his suffering.

"I have undergone several surgeries including skin grafts," he said. "I am spending most of time lying in bed. I have a family to feed, but I cannot work. We want to be treated the same way that U.S. citizens are treated."

Younis Khudhair Abbas, whose uncle and cousin were killed at the square, said family members were told not to discuss details of the meeting because their comments might be used by the defense.

"We asked to be sent to America to attend the trial. We also asked for compensation," Abbas said. "After meeting with the prosecutors, we became more hopeful of good results and we got the feeling that the American administration is honest."

But Wisam Rahim, who was wounded on the square, said the guards should be executed.

"Blackwater vehicles and helicopters were firing at us. I demand that these guards be executed. We want to see justice done," he said.

The five men have been charged with 14 counts of manslaughter, 20 counts of attempted manslaughter and one count of using a machine gun to commit a crime of violence. The machine gun charge, typically used in drug cases, carries a 30-year minimum prison sentence.

The Blackwater guard who struck a deal pleaded guilty to killing one Iraqi and wounding another.

Iraqi investigators found that 17 Iraqis were killed in the assault.

Assistant Attorney General Patrick Rowan said earlier this week that evidence in the case could only prove the guards shot 14, although he left open the possibility of future charges.

The Moyock, North Carolina-based Blackwater Worldwide was not charged in the case and has said it stands behind the guards despite being "extremely disappointed and surprised" that one had pleaded guilty.
By Associated Press Writer Qassim Abdul-Zahra