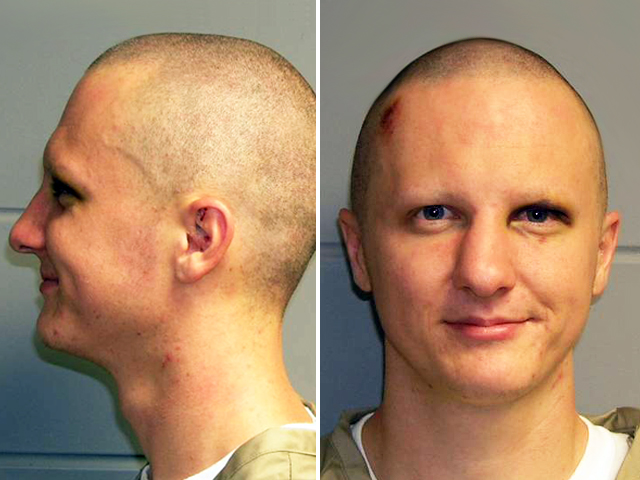 PHOENIX - Prosecutors on Monday asked a judge to commit the suspect in the shooting rampage that wounded Rep. Gabrielle Giffords to a federal facility where he can be evaluated by psychologists to determine whether he suffers from a mental defect that makes him incompetent to stand trial.

They cited a YouTube video, in which prosecutors believe a hooded Jared Lee Loughner burns an American flag, and a photo posted on MySpace of the type of gun used in the Jan. 8 shooting to suggest that the 22-year-old has mental issues.

The video, entitled "America: Your Last Memory In A Terrorist Country!", shows a person thought to be Loughner wearing garbage bags on the lower part of his body and features a heavy metal song that repeatedly contains the lyrics "Let the bodies hit the floor."

In the MySpace photo, the gun is seen resting on top of a U.S. history book and on top of a circular item depicting the White House and containing photos of U.S. presidents around its edges.

The filing by prosecutors marks the first time both postings have been publicly revealed.

Thirteen people, including Giffords, were wounded and six others were killed in the shooting at Jan. 8 event where the congresswoman was meeting with constituents.

Loughner has pleaded not guilty to charges of trying to assassinate Giffords and kill two of her aides. He will be arraigned Wednesday on new federal charges that included the murders of a federal judge and a congressional aide.

Prosecutors say they are seeking the psychological evaluation to avoid any delays in the criminal case against Loughner.

At a January court hearing, Clarke said she wasn't raising issues about Loughner's competency "at this time" after U.S. District Judge Larry Burns asked whether there was any question about her client's ability to understand the case against him.

Prosecutors also submitted arguments on Sunday in their request for Loughner to provide handwriting samples that can be compared to writings found in his home.

Investigators found handwritten notes in a safe at Loughner's home after the shooting. They read, "I planned ahead," "My assassination" and "Giffords." One note said "Die, bitch," and authorities believe that was a reference to Giffords.

Loughner's attorneys say that their client shouldn't have to provide a sample because he's willing to look at the writings and perhaps agree that he wrote them.

In a response filed Sunday, prosecutors argue that they can't be expected to accept Loughner's word, and that his rights are still protected.

Prosecutors say they want an FBI forensic examiner to instruct Loughner to copy certain letters, words, numbers or phrases onto paper "in a quantity necessary for the examiner to make an analysis and reliable conclusion."