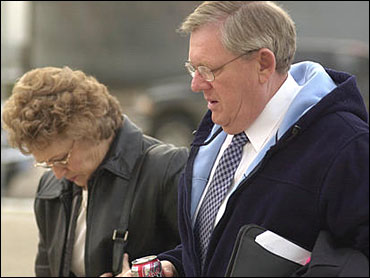 Jennifer Walters and her family were headed east in their pickup last December when a Cadillac sped past a stop sign and missed them by mere feet. A deputy sheriff who later stopped the Cadillac said the driver was U.S. Rep. Bill Janklow.

Walters and the deputy sheriff testified Wednesday about the near miss as the prosecution wrapped up its case in Janklow's second-degree manslaughter trial in the death of a motorcyclist at the same rural intersection.

Walters told the jury she "heard tires screeching and gravel kicking up" as she drove near Trent on Dec. 29, 2002, then turned around and saw the car's back bumper.

She called 911, and Moody County Deputy Sheriff Tony Aas said he stopped the Cadillac just outside of Flandreau about 10 minutes later. Janklow was the driver and he was doing 92 mph in a 65 mph, Aas testified.

Walters said she didn't press charges because Janklow was governor at the time.

Eight months later, prosecutors say, Janklow ran a stop sign at the same rural intersection and drove into the path of a motorcycle. The motorcyclist, 55-year-old Randy Scott of Hardwick, Minn., was killed.

The defense contends a diabetic reaction caused Janklow to miss the stop sign in the Aug. 16 crash that killed Scott. Janklow had a stop sign; Scott did not.

Emergency medical technician Mark Bonrud testified Wednesday that Janklow did not appear to be suffering from low blood sugar after the crash, but he said Janklow did accept a Coke and some candy at the scene — two items that diabetics do not usually take unless they are low on sugar.

Another EMT, Tom Price, said he took a bottle of water and a candy bar to Janklow minutes after the accident but doesn't know if he ate it.

Bonrud said Janklow told him at the scene he had had something to drink or eat earlier. But Chris Braendlin, a Janklow aide who was in the car with the congressman, testified earlier Wednesday that Janklow had not had anything to eat all day.

Braendlin testified that Janklow seemed fine on the trip from Aberdeen and recalls the Cadillac slowing down before the collision. "I remember slowing down but I don't remember where," he said.

Another officer testified Wednesday about another incident in April 2002 when he pulled Janklow over for speeding but also didn't ticket him. Lyle Tolsma said he clocked a car doing 84 mph in a 40 mph construction zone.

"Did you recognize the driver?" prosecutor Roger Ellyson asked him.

Janklow is one of South Dakota's most popular politicians and served four terms as governor before being elected to the House in 2002. If convicted of manslaughter, he could face up to 10 years in prison and a House ethics committee investigation.