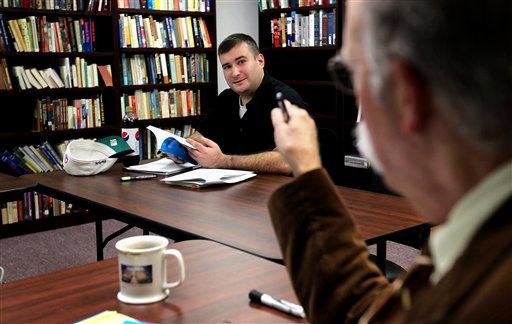 The man accused of stabbing to death his 8-year-old daughter and her best friend hunted his child down in a park in a fit of rage because she was supposed to be confined to the house for stealing money, prosecutors said Wednesday.

A judge denied bail for 34-year-old ex-convict Jerry Hobbs after prosecutors said he admitted in videotaped and written statements to beating and stabbing his daughter Laura Hobbs and 9-year-old Krystal Tobias on Mother's Day.

He claimed the older girl pulled a knife on him, but prosecutors said they doubt that.

The girls were found dead Monday in a park in Zion, the day after they never came back from a bike ride. They had more than 30 stab wounds between them, and Laura was stabbed in each eye, prosecutors said.

"You can see through the injuries to these two individuals the rage that was exhibited. This was a slaughter of two little girls," prosecutor Jeff Pavletic said.

Hobbs, who had been released from a Texas prison last month, said he thought Laura had stolen money from her mother, prosecutors said. She was supposed to be grounded on Mother's Day, but her mother let her go out and play, so Hobbs went out to find her and bring her home, Pavletic said.

"Mr. Hobbs believed that her mother was too lax in her supervision of Laura," the prosecutor said.

But when Hobbs found the girls, Laura refused to go home, and he beat and stabbed the girls with a small kitchen knife, prosecutors said. Hobbs then allegedly dragged them into the woods and left them side-by-side.

Hobbs told investigators that Krystal pulled the knife to defend her friend, and he wrested it away. But prosecutors said they doubt the little girl was carrying a blade.

"It was a brutal beating, repeated punching of the two little girls and then repeated stabs. It's pretty horrible," State's Attorney Michael Waller said.

On CBS News' The Early Show, State's attorney Michael Waller said that there was no indication of Hobbs planning the murders.

Waller told NBC's "Today" that the father had showed a lack of emotion and that "things didn't add up" in his interviews with police.

The prosecutor said Hobbs went looking for his daughter and that Krystal "just happened to be there," before the father killed both girls.

Waller also told Early Show co-anchor Rene Syler that the bodies were found in an area that was pretty remote.

Public Defender David Brodsky said he had not seen details of the case and had no comment, but he said he would assign two capital defenders to represent Hobbs.

Hobbs has a long criminal history dating to 1990 in Texas, including arrests for assault and resisting arrest.

Just last month, he was released from a Texas prison after serving time for an assault in 2001. He had argued with Laura's mother, Sheila Hollabaugh, then grabbed a chain saw and chased neighbors until someone hit him in the back with a shovel, according to prosecutor Rick Mahler in Texas. No one was injured.

Hobbs was sentenced to 10 years' probation but failed to appear for required meetings and was thrown in prison in 2003.

Outside the home where Jerry Hobbs and Sheila Hollabaugh had lived with their children, a man who identified himself as a family spokesman Wednesday read a brief statement and said they would have no other comment.

"The entire family wants to express their deepest sympathy for the Tobias family," Jeremy Harter said. "They wanted to thank the Zion community for all their support throughout this trying time."

Zion, along Lake Michigan, was founded in 1901 by a faith healer. It has about 22,000 residents but retains a quiet — at times, rural — feel despite being on the edge of both the Chicago and Milwaukee metropolitan areas.