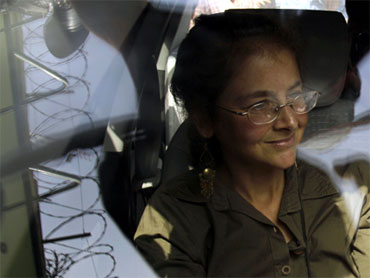 A Peruvian prosecutor said Friday he will ask a court to revoke the parole of American activist Lori Berenson and send her back to prison to finish her 20-year sentence for aiding leftist rebels.

Julio Galindo, the government's lead anti-terrorism prosecutor, said he would tell the national criminal appeals court on Monday that the 40-year-old New Yorker still poses a threat to society and that there are doubts about whether she has cut all links to the leftist rebel group Tupac Amaru Revolutionary Movement.

Berenson was granted parole on May 27, and wrote in a letter to Peru's pardons commission that she wants to go home to the United States. She said that both she and her 1-year-old son need medical treatment.

Galindo argued that she was wrongly granted parole and should be returned to prison for the remaining five years of her sentence.

"I don't think anyone can guarantee that someone convicted of terrorism isn't going to re-enter this world of terrorism," Galindo said in a news conference.

He argued the decision in May to grant parole was riddled with errors.

Berenson was initially accused of being a leader of the MRTA, a group that bombed banks and kidnapped and killed civilians, though it was nowhere near as violent as the better-known Shining Path insurgency.

When she was arrested in November 1995 with the wife of the group's leader, prosecutors said Berenson was helping plot a takeover of Peru's Congress. The alleged plot was thwarted in a gunbattle at a rebel hideout that Berenson was convicted of having rented.

Berenson was convicted of treason by a military court in 1996 and sentenced to life in prison. But after an intense campaign by her parents and pressure from the U.S. government, she was retried in a civilian court. In 2001, it convicted her of the lesser crime of terrorist collaboration and sentenced her to 20 years.

Berenson apologized in her letter to Peru's pardons commission at the time of her release, saying "I assume my penal responsibility for the crime of terrorist collaboration." In the letter, she asked the government panel to commute her sentence.

Under the terms of her parole, she is required to remain in Peru until the sentence ends in November 2015 - unless President Alan Garcia decides to commute the sentence.

If the court on Monday decides to revoke parole, Berenson would be required to return to prison together with her 1-year-old son, Salvador.

Her lawyer and husband, Anibal Apari, dismissed the prosecutor's arguments.

"From a legal point of view, there is no reason to revoke her parole," Apari said.

Berenson, who has kept a low profile since she was freed, is expected to speak during Monday's hearing in the national penal court to make her case for upholding her parole.